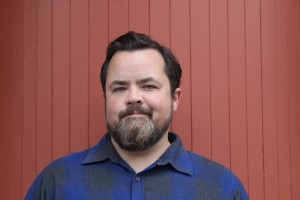 Eric Fritzius writes things, edits them, and occasionally acts. He also makes mouth noises into a microphone in the form of audiobooks.  Sometimes he even teaches others how to write, and/or directs them how to act.  It’s all part of the service.

His plays …to a Flame, …and Tigers and Bears, Honey Do, A Game of Twenty…, and Fargo 3D, Playing Cards by Twilight’s Shine and Aye Do, have been produced at the Greenbrier Valley Theatre in Lewisburg, W.Va..   …to a Flame and …and Tigers and Bears were also produced by the Independent Theatre Collective in Wheeling, W.Va.   Fargo 3D has also been produced by the Lewis Theater in Lewisburg, the 0 to 60 Play Festival at Longwood University in April 2017, and the MadLab Theatre’s 18th Annual Theatre Roulette in May 2017.  You can read some of them via his page at the New Play Exchange.  Check out more information about them at the Plays Page. 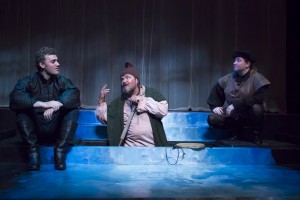 A frequent actor at the Greenbrier Valley Theatre, he has appeared in numerous productions since 2003.  Among his favorites are: Ain’t Nonthin’ Quick N’ Easy, Y-Mains, Oliver!, Variations on the Death of Trotsky, Degas C’est Moi, Phillip Glass Buys a Loaf of Bread, Floyd Collins, The Crucible, A Christmas Carol, Occupy My Mind, The Greenbrier Ghost,  The Night Thoreau Spent in Jail, Dracula: A Rock Opera, The Drive-In, Man of La Mancha, Babes in Toyland, The Skin of Our Teeth, The Tragedy of Hamlet, and To Kill a Mockingbird.  He has directed the short plays FISH SCHTICKS (2014), PROPERTY RIGHTS (2015), FOREVER (2016), and The Magic of Niagara (2017) for GVT’s New Voices Play Festival.  For two years he appeared as Duncan Mall in the Ronceverte amphitheater outdoor drama Riders of the Flood (2005-2006).  In 2007 he co-directed the sequel to Riders… called Big Dreams, Restless Spirit.  For the past two summers he has directed dramatic productions for the Pocahontas Drama Workshop at the Pocahontas County Opera House in Marlinton, W.Va.  These have included The Opera House PlayFest (2016), A.J. DeLauder’s play The People at the Edge of Town (2017), and The Opera House PlayFest (2018).

For nine years he has served as the script coordinator for the writers’ camp portion of Summer Scholars Onstage, an annual three week camp for gifted and talented junior high and high school students, at Mississippi State University.  A former camper himself, Eric enjoys returning to help the writers campers craft a three act musical comedy in the space of a week.  While the process can be stressful, the camp has produced some of his favorite theatre experiences of all time.

Eric has served as secretary (twice over) and president of West Virginia Writers, Inc., as well as creating and hosting a podcast for the organization for several years.  He and his wife live in Greenbrier County, W.Va, along with an inadvisable number of dogs. 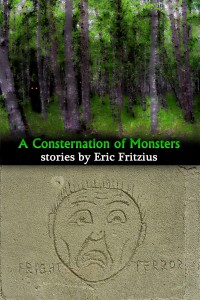 A Consternation of Monsters–

A consternation, as you should remember from grade school, is the collective noun for monsters.  I thought it a fitting title for a collection of short stories that each contain monsters of various sorts and shades.  In these tales, a creature of make-believe proves difficult to disbelieve, a trickster-god takes an unkindly interest in witnesses, eldritch horrors can be summoned with a quilt, frustrated wolves face dangerous prey, the angel of death wears a plaid sport coat, wise old women are to be feared and heeded, Elvis remains king, the corpses of legends can be perilous to have around, and where one of the most powerful objects in the world is a fork.

The settings for the stories span from rural Mississippi, Appalachia, the desert southwest, Alaska, and on to Memphis, Tennessee.

REVIEWS FOR A CONSTERNATION OF MONSTERS

Eric has narrated a number of audiobooks.  He has voices six books in S.D. Smith’s Green Ember Archer series and three more in his Tales of Old Natalia series.  He has narrated Mississippi Nights by D.M. Webb, How to Carry Bigfoot Home by Chris Tarry, To the Bones by Valerie Nieman, and his own A Consternation of Monsters.  Hear samples of his work on the AUDIOBOOKS page.