Here you will find a bit of my writing, including my Horribly True Tales from the Drunken Trucker series of humorous nonfiction tales. 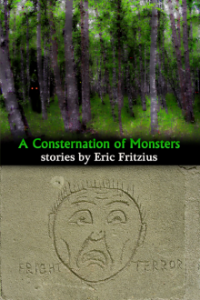 For fiction, however, you should turn no further than A Consternation of Monsters, my new collection of short stories (some of them award-winning).

A consternation, as you should remember from grade school, is the collective noun for monsters.  I thought it a fitting title for a collection of short stories that each contain monsters of various sorts and shades.

In these tales, a creature of make-believe proves difficult to disbelieve, a trickster-god takes an unkindly interest in witnesses, eldritch horrors can be summoned with a quilt, frustrated wolves face dangerous prey, the angel of death wears a plaid sport coat, wise old women are to be feared and heeded, Elvis remains king, the corpses of legends can be perilous to have around, and where one of the mo

st powerful objects in the world is a fork.

A Consternation of Monsters is available for purchase on Amazon.com in both print and ebook formats.  It will also be used as the basis for an upcoming podcast found on this very page.

You can read a sample from it from both Amazon and Kindle.  In fact, if you download the Kindle sample, you get the entire first story, “The Hocco Makes the Echo.”

And check out the foreword to the book, written by radio host Rik Winston, of UFO All Night fame.