The TARDIS Collector’s Corner: The Cookie Jar (My 3rd TARDIS)

In the early 2000s, pre-2005, around the time I was searching the internet for TARDIS models and toys, leading to my purchases of my first two TARDi, I began coming across TARDIS cookie jars for sale.  These were ceramic TARDIS cookie jars, with removable roofs/tops for the insertion and removal of cookies.  And I could never find one for under $40.  Now I’d probably spent $40 total for my two previous TARDi and a bag of Jelly Babies, but I just couldn’t find a way to justify spending that kind of cash on an object I was, in all likelihood, going to drop on the floor and smash into TARDIS bits at some point (recreating the ending of Season 7, a full ten years in advance–you can do that with Doctor Who stuff).  So I didn’t.  But I really really wanted to.  I just kept looking at them up on eBay and AmazonUK, and lamenting the criminally high postage costs that would accompany a $40 (60 pound) price tag.  I even looked into becoming a cookie jar dealer, figuring I could get a bunch of them in bulk for wholesale prices and resell them all, minus one, to recoup my investment.  That didn’t happen either.  And still hasn’t happened to this day.  Instead, I came about the acquisition of a cookie jar without much effort on my part.  I was given one by a generous soul who was well-versed in my love of Doctor Who and who, loving soul that she is, gave me had already given me two even better gifts in the past, one of which was Doctor Who related and the other was my wife.  I’m talking about my mother-in-law Susie, a.k.a.: Ma.

I may have dreamed of owning a TARDIS toy from a very early age, but what I truly wanted most in the world as a 4th grader was a Doctor Who scarf just like the one worn by Tom Baker on the show. (Yeah, I know, there were like 5 of them during his eight year run, and I would have settled for any of them.)  The scarf was such a monstrous thing in both length and color scheme, but I adored the show and therefore adored the fashion sense of its characters–Bohemian as it was. At the time, I didn’t even consider that I might one day own such a scarf. That sort of accessory was only found on TV, as far as my 9-year-old brain was concerned. Instead, I wound up borrowing a muffler from my dad’s then girlfriend, Nell.  It is an item of clothing which I still possess to this day.  Nell’s muffler (which, BTW, is also the name of my bluegrass Nelly cover band) looked nothing like the Doctor’s scarf, being white and with tied off tassles on the end.  It was, however, the only scarf I had and I wore it habitually.  (Somewhere there exists a photo of me wearing it, along with a paper plate Tom Baker mask I’d made in art class at school.)

Time travel ahead a decade or so. My friend Joe and I took a weekend trip to Atlanta and happened to find a Nerd Shop, somewhere on the outskirts of the city. We were nearly finished with our shopping and were on the way to the counter to check out when there, lying coiled in a basket like a multi-colored snake, we spied a single, full-sized, Doctor Who scarf.  It was a thing of beauty and we both coveted it immediately. However, because there was only one scarf and two of us, neither of us could purchase it for fear of drawing the eternal jealous ire of the other.  Or we could have gone in on it together, but then we would then have had to work out some kind of complicated time share deal for it and that seemed unwieldy.  Some time later, I was able to search out a knitting pattern for such a scarf on a Doctor Who Usenet newsgroup, but at the time I knew no one who knitted who could make one for me.

Time travel ahead another decade. I’m married to a wonderful woman who had the good fortune to have been given birth by another wonderful woman, a.k.a.: Ma.  Soon after I learned that Ma is a crafty soul who can knit all sorts of yarny goodness, if of a mind. It took me a couple of years, but slowly it dawned on me that here was a lady who COULD knit and who loved me enough that she might do me up a scarf if I asked real sweet.  On Thanksgiving, in 2002, I even brought the subject up to my wife, asked if she thought Ma might be willing. The wife said, “No way.  A Doctor Who scarf would take forever to knit and Ma doesn’t have that kind of time.”  I felt foolish for even asking.  Of course Ma would never knit me something like that.  Maybe after a decade or so of being in the family, once she was pretty sure the marriage had taken root, she might consider it, but it was too much to ask only two years in.

One short month later, a day or so from Christmas, we were back in North Carolina visiting the in-laws and out-laws for a day before heading toward Mississippi. I was sitting in a chair, watching TV when the wife and Ma approached carrying a double lined grocery bag, tied off by its straps. They passed it to me and stood smiling down. I took it, not even suspecting what might be inside. As I was trying to untie the straps, I caught a glimpse of knitting through the top and instantly knew what it was. Deep inside me, the 4th grade version of me snapped to attention and I began clapping my Puppy Chow dusted hands together in pure 9 year old glee.  At long long last, I had my scarf. And a beautiful scarf it was, 17 feet of green and tan and brown and orange–just fantastic! Ma said it was the ugliest thing she’d ever created, but she was glad I liked it. I wrapped myself up in its length and soaked in the coolness of the very concept.

“You’re gonna sleep with that thing, tonight, aren’t you?” the wife asked.

Time Travel ahead four more years to 2006, well into David Tennant’s first year as the 10th Doctor.  Ma let it be known that she’d sent a package to us and gave the wife special instructions that she was to take my picture as I opened. it.  And so it came to pass that in two days time a large box arrived.  Unfortunately, the wife was on call that night, so I had to wait to open it for fear of retribution for lost snapshot opportunities. When she returned the following day, however, I alerted her to its arrival and of my good behavior in not peeking at its contents. The wife told me that I was going to freak out with happiness when I saw what it was. And I knew she spoke the truth, for surprises from Ma designed to freak me out in a happy way always do.  The wife turned on the camera.

Carefully I cut the tape holding the box flaps down, taking my time with it to prolong the moment. (I get so few positive freak-out moments in life, so it’s best to savor them when they do come my way.) I then sliced the tape down the center of the box, slowly opened the cardboard flaps and peered into its depths.

My first glimpse of the contents was of an emergency roadside tool kit, the very kind I’ve been meaning to purchase for several years now. It was not, however, a freak-out worthy present. A bit to the left, I next spied a pair of lounge pants printed with the characters of South Park. Again, a fine present, but I was not freaking out.

The me from 2006 with his new time traveling cookie jar.

Then I saw it.

Partially submerged in the sea of pink packing peanuts within was a Doctor Who TARDIS cookie jar.  What was even cooler, though, was that this was not the porcelain TARDIS cookie jar that I was so certain I would break but a much larger (and less fragile) plastic one which played TARDIS sounds every time you opened or closed the lid.  (Or just pressed down on the lamp on its roof.)  Granted, this meant I had an automatic alarm that would sound every time I went for a cookie, but it made up for it in coolness points alone.

I completely and happily freaked out!   I cannot show you the images the wife took of my freak-out, for they are even more embarrassing than my admission of sleeping in my scarf.  Instead we have one from just after I’d calmed down a bit.

I finally had my cookie jar.  And it was a much more screen-accurate model of the TARDIS than the porcelain cookie jar would have been–which was a bit rounded off for easier casting.   I’m not certain of the manufacturer, though the packaging certainly suggests Underground Toys, or another such early toy company that had the license.  If they still have the license, they’ve more recently upgraded to the Matt Smith model TARDIS.  And they also have a porcelain model to boot, but, again, it’s nearly $40. 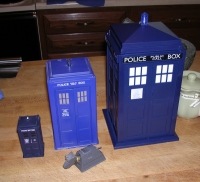 My TARDIS cookie jar lived in the kitchen for years afterward and was rarely passed without its lamp being pressed to make the TARDIS sound.  It has since relocated from our current kitchen and now lives atop the bookshelves of my office, along with its other sister TARDi.  (BTW, Sister Tardi is the name of my bluegrass French-language Night Ranger cover band.)   It does not currently contain cookies, but is used to store my pipe tobacco sampler pack, purchased during our 10th anniversary weekend getaway to Gatlinburg.  (Glad I didn’t have to wait that long to ask for a scarf.)

As far as TARDIS functionality goes, it’s mainly decorative.  And, for some reason, the cookie jar doesn’t have the wood grain sculpting of future TARDIS releases.  It does have the shape and details down otherwise.

I’ll give this one four TARDi.  And will further note that while it was the largest TARDIS I own for many years, that honor has fallen to another TARDIS.  I mentioned the scarf and the cookie jar as major Doctor Who related gifts from my mother-in-law, but I assure you she was not done.  There have been, to date, three more hand-made TARDIS-related gifts from Ma which come very close to rivaling even the scarf in coolness and at least one of which are larger than the cookie jar.  Those will be revealed in future posts.