The TARDIS Collector’s Corner: The TARDIS Bookends by Underground Toys 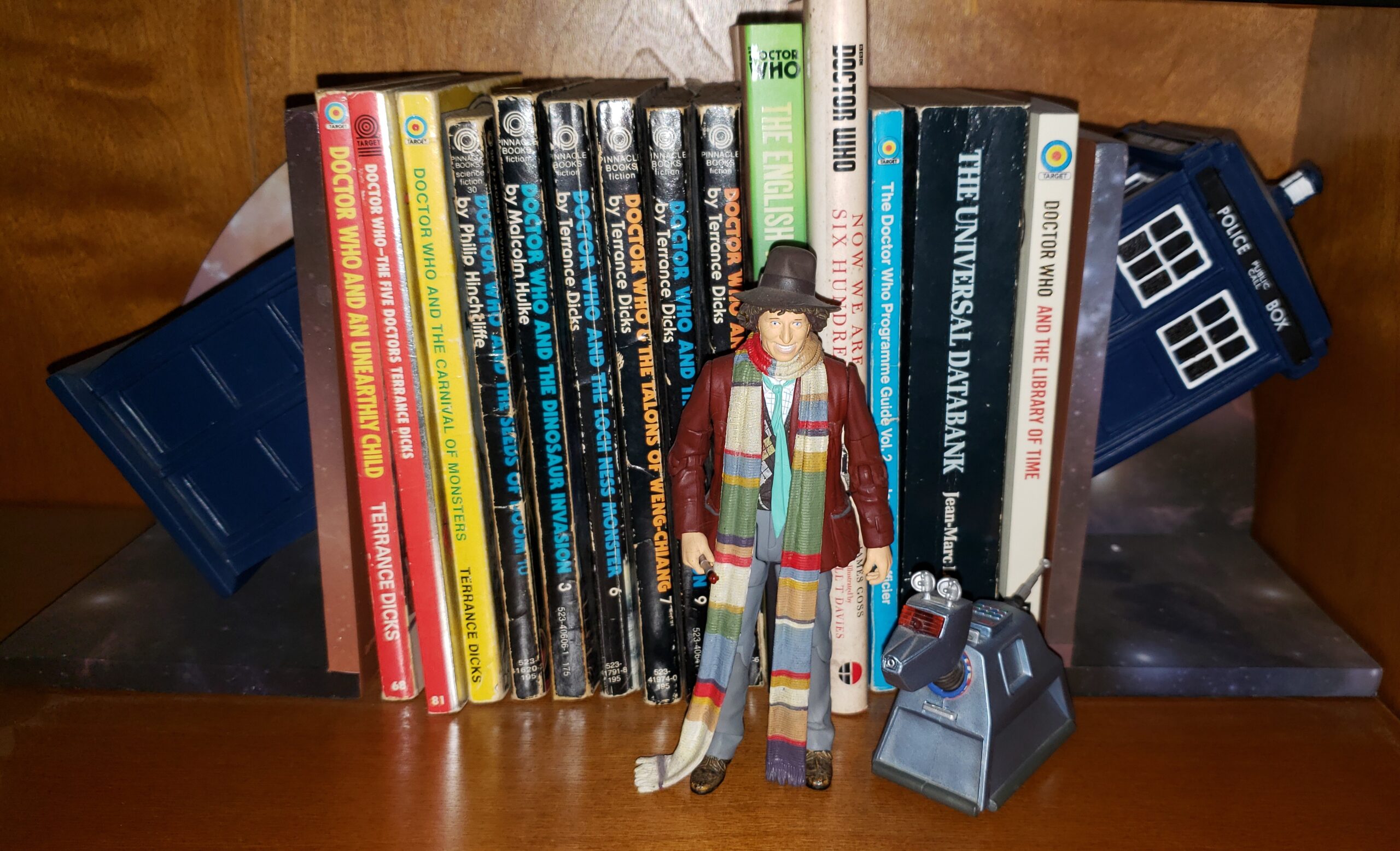 This particular set of TARDIS bookends is not necessarily a Christmas-themed one. However, I received mine as a gift for Christmas, a few years ago, so I tend to associate it there. No better time to talk about it. I have my niece Catherine (a.k.a. “K.T.”) to thank for this set. I loved it immediately, as I’d been eyeballing the set whenever I’d see it in a store, but I had never pulled the trigger on the purchase because the sets tended to be in the $50 + range. K.T. had been a fan of the show during the David Tennant era and she wound up re-watching many of those episodes and on into the Matt Smith era while she lived with us for a couple of years. So she knows of my love of TARDISes of old. (In fact, I think she still has one of my TARDISes–a fish tank ornament I offered for use in her fish tank but which she instead just put on her shelf, much as I’d been doing. If these bookends were a replacement for that one, though, I’ll take it!)

These bookends were released by Underground Toys, the manufacturer of any number of other fantastic Doctor Who products, so you know out of the gate you’re in safe hands with folks who know the topic. Unlike some bookends where you have two identical sculpts on each end, this set splits the TARDIS in twain, perhaps as it passes through the other-dimensional barrier posed by your books. In my case, it’s even better because I use the bookends to hold up my classic Doctor Who novelizations, and a few more modern ones as well. 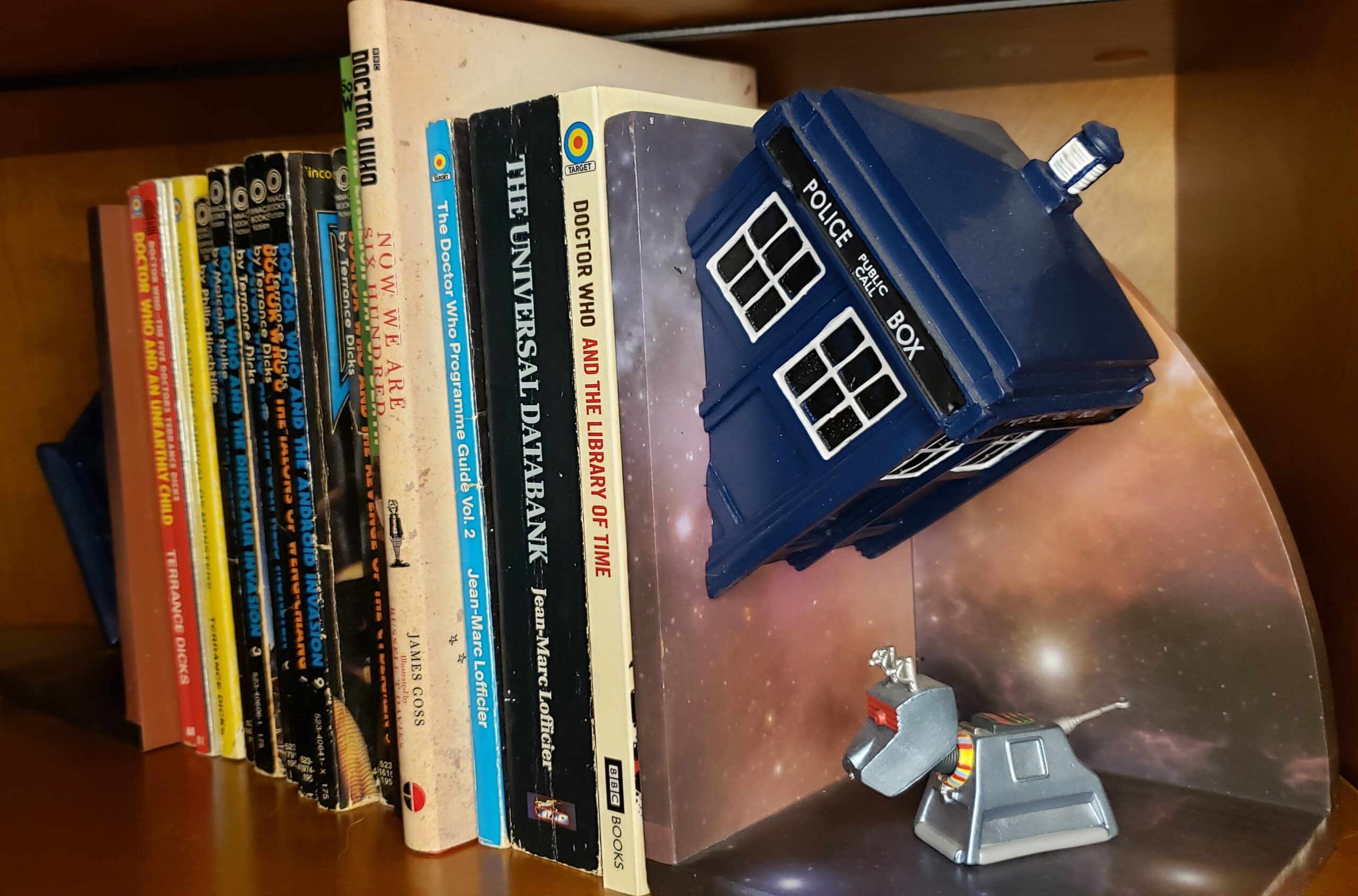 The bookends are presented with the TARDIS door side up at an angle, against a starfield backdrop. The right half has the top of the TA`RDIS popping out with plenty of room below to add some other toy for display, such as K-9, as I’ve shown, or even another TARDIS. But the windows look great, framed in white with the distinctive dark panels of the Smith era. 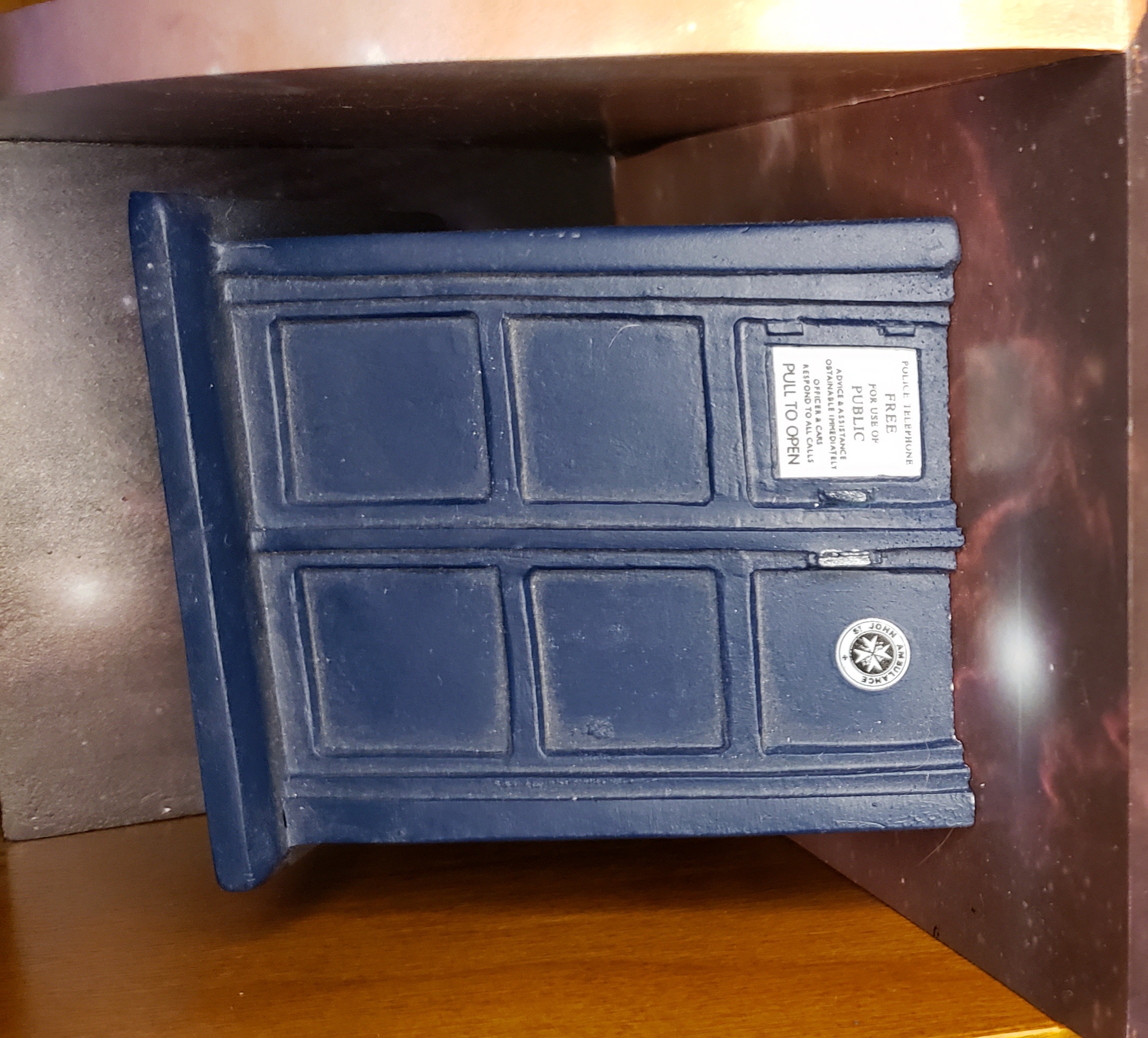 The left half is mostly taken up with the lower half of the TARDIS, so there’s not much room to display anything there. (It’s also a dickens to dust.) It looks just like the plain side of the TARDIS until you look at it from above, where you can see the details of the door, including door sign and ambulance badge.

Now, it would certainly be a terrible thing if I’d been given a TARDIS for Christmas by a loved one and then spent a bunch of time talking shit about it here. But as this is a review, of a sort, so I feel like I have to talk a tiny bit of shit, but just a smidge (smudge?).

If I had a complaint about the craftsmanship of this piece, it’s that the lower half of the face of the TARDIS on my particular set (as seen in the above photo) seems to be a little warped in its molding. One might chalk this up to the warping of time and space which the TARDIS experiences in the show, but I’m pretty sure its just that someone at Underground removed it from the mold before it was fully set. Whatever the case, I don’t care. In fact, the first time I even noticed this flaw was in looking at the above photo while writing this. You certainly can’t see it

looking straight on at the bookends, so what does it matter? I dig these a lot. I give them a solid 4 TARDi.