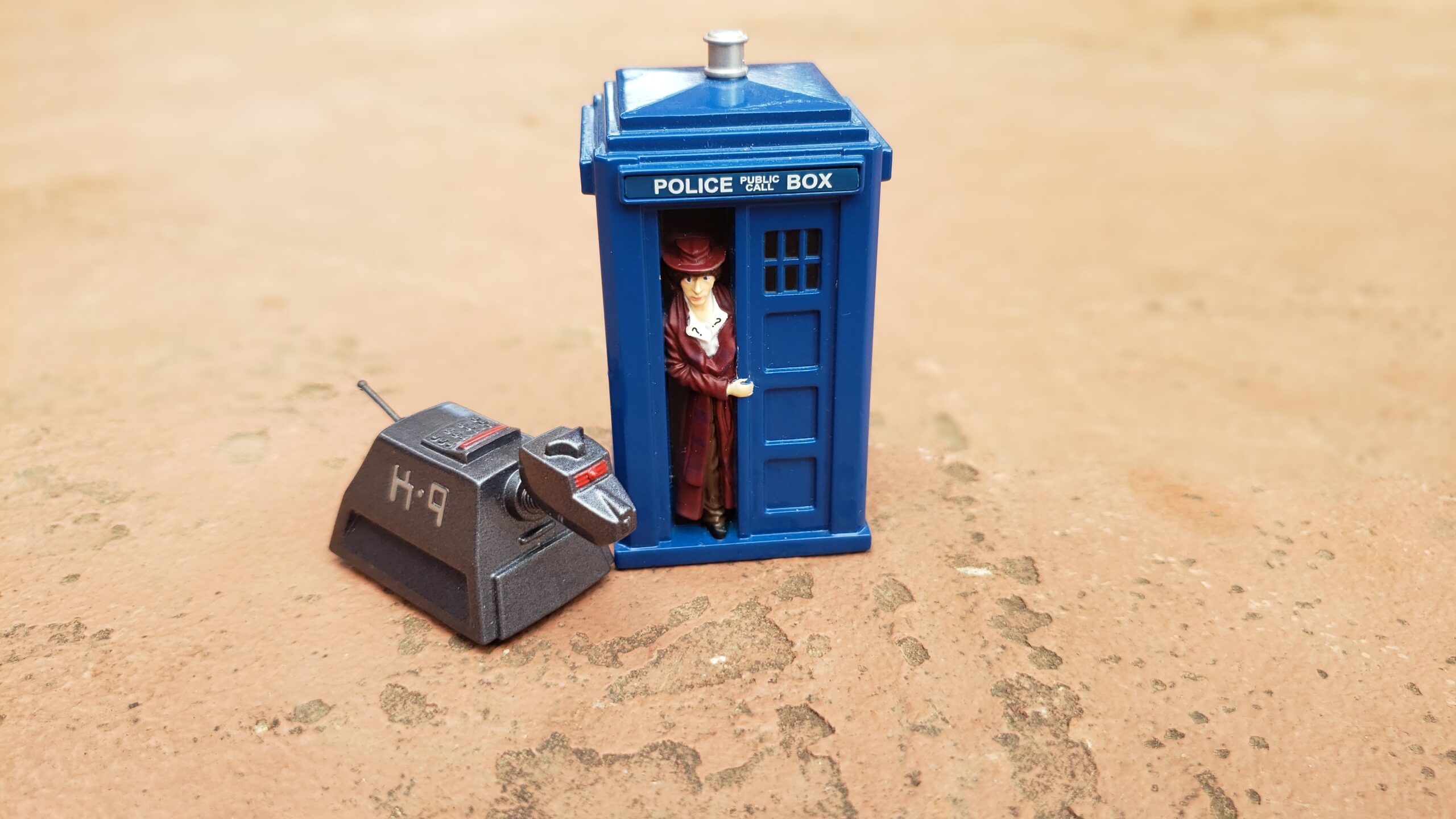 I cannot say for sure where I first saw the Corgi Tom Baker Die-Cast TARDIS & K-9 set. Likely, it was one of the products for sale on WHONA.com, in the early oughts. I expect they’ve stocked it several times over the years. It was among a number of Doctor Who toys that the Corgi Company produced round about 2004, with many Doctor Who villains and characters represented. Tom Baker, however, is the only Doctor they seem to have included in the line, appearing in three different versions, all clad in his burgundy outfit from his final two seasons. 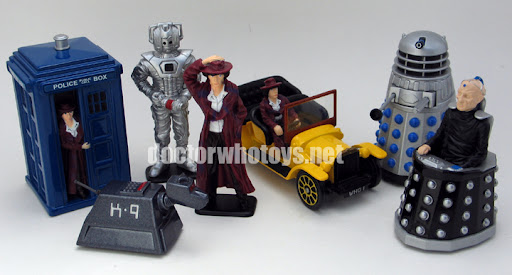 They produced a free-standing 4th Doctor figurine, clutching his hat to his head; a 4th Doctor driving his car Bessie (a bit odd, as the only story in which the 4th Doctor drives Bessie is his first story, Robot, and in which he is not clad in his burgundy outfit at all; and the piece I now own, the Tom Baker clad in burgundy outfit peeking out of that door of the TARDIS. The set I bought came with a die cast K-9, which is wildly not to scale with the Doctor or the TARDIS, but whatever.

As with the above anachronistic costuming on some of the figures chosen, there’s just a lot about this particular set that also leads me to believe the Corgi crew were not necessarily knowledgeable about the show, but were just in it for the cash. Their dedication to a quality product led them to produce a TARDIS of a satisfying likeness to the actual prop, really only cutting corners with the roof lamp, which is just a cylindrical chunk of silver reminiscent of a LEGO stud, with little hint that it is supposed to be a lamp at all. But the overall shape is great. Where Corgi’s inattention to details from the show fall short, though, is that they have the miniature Tom Baker peeking out of the left-hand door of the TARDIS. By and large, in the classic and current series, if only one of the doors of the TARDIS is open, it 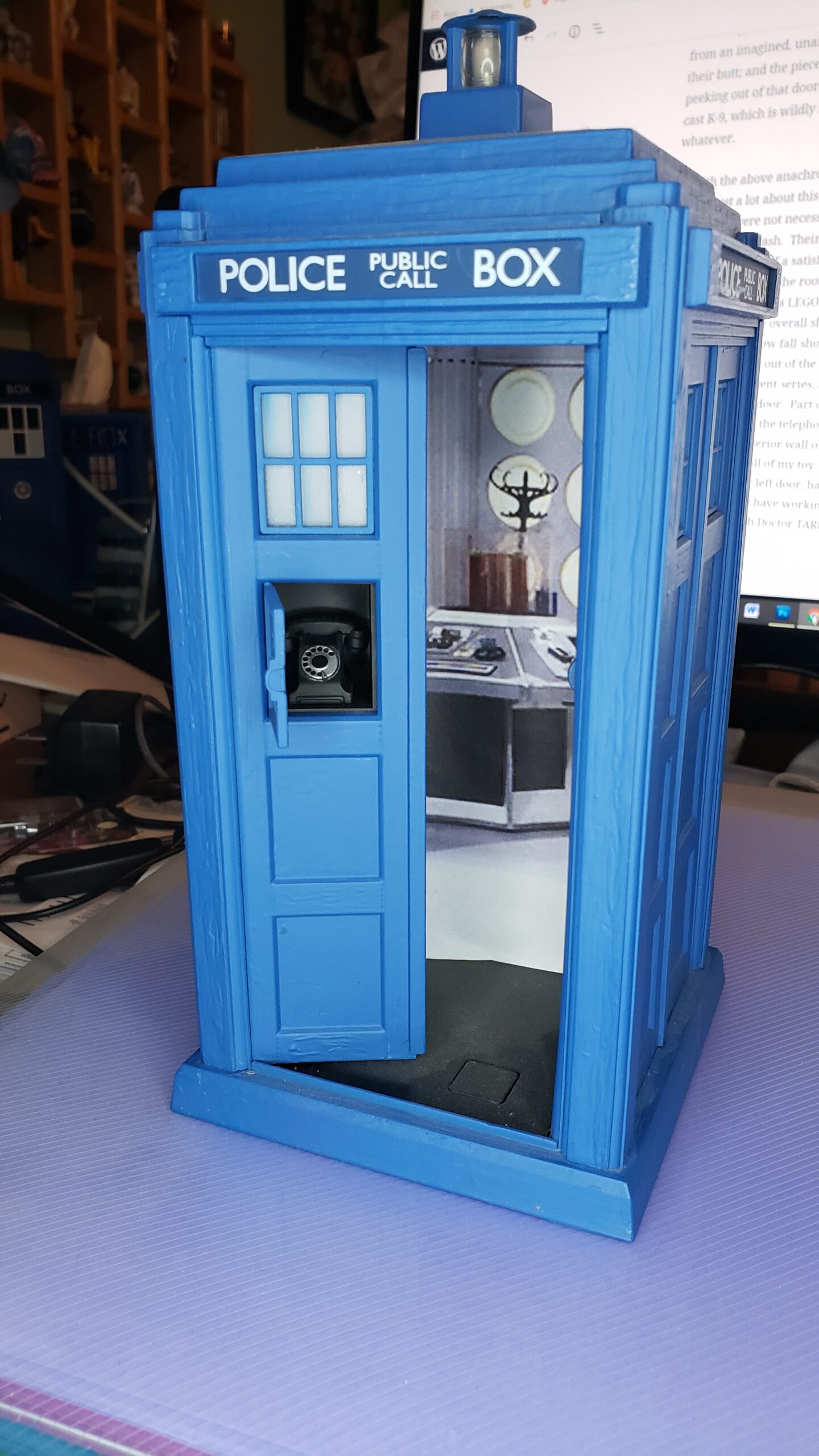 is the right-hand door. Part of the reason for this, I suspect, is that the left hand door contains the telephone cabinet, which sits behind that door and collides with the interior wall of the TARDIS prop when opened. And I only think this because all of my toy TARDi with opening doors, and a phone installed behind the left door, have that issue. (Okay, I just checked and this is not entirely accurate. Of the three TARDISes I own that have working phone panel doors, only one of them really has this problem–the 7th Doctor TARDIS, which has an actual box behind the door in which a replica vintage phone sits (see photo). The box keeps the overall police box door from opening more than a little bit. The other two with working phone doors (the 9th/10th Flight Control TARDIS and the first 11th Flight Control TARDIS) have phones that hang from the backside of the door, instead of within a box, and take up less room, allowing for fully opening police box doors. (Incidentally, while we’re complaining about anachronistic and inaccurate toys, please note the mid-to-late period Tom Baker console I added to the 7th Doctor’s TARDIS.) 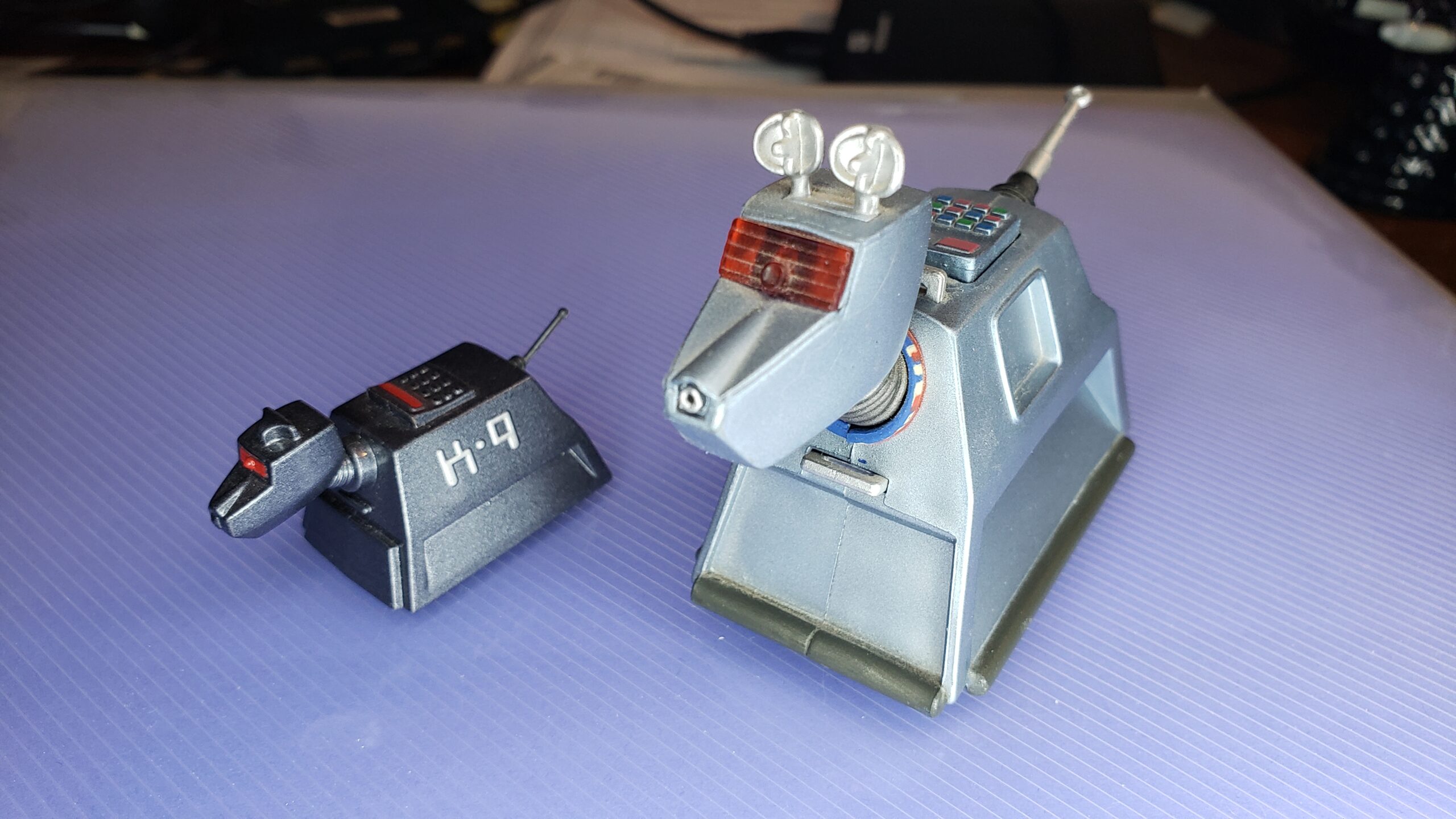 The Corgi K-9 diecast toy I have about as many complaints about. While Corgi got the general body shape right, there are some inaccuracies to be found. The most obvious one is that it has no ears. The head shape itself is very nice for such a small figure, but instead of the antenna ears of the actual K-9 prop, this one just has a blobby triangleish thing on top of its head, sort of like an ear unibrow. If viewed from the side, at just the right angle, it kind of implies the presence of ears and gives it the right silhouette. Looking at it from head-on, though, it looks like someone gave K-9 a pillbox hat. Other oddities include a raised section between its front “legs,” instead of a depression similar to that of its lower sides and back. There’s no hint of a tag, there is an implied collar painted the same metallic silver as the body. And the body has the name “K-9” written on both sides of the toy, instead of just the right side, with a TV screen on the left, as would have been more accurate to the prop. My guess, Corgi was given production stills to work from that only showed the prop from the K-9 side and they just assumed it was on both. (It’s a cynical view, I know, but it’s precisely what happened with many of the Dapol toys, which, as I’ve written about before, led to things like a five-sided TARDIS console, a Davros with two arms, a green K-9, and a Tom Baker with no scarf.)

Still, I’m not going to fault the Corgi TARDIS for the weaknesses of the Corgi K-9. It’s a great-looking piece, which I had wanted for years, so I grant it a full 3.5 TARDi.