For many years as a youth into young adulthood, I was both a camper and staff member at Summer Scholars Onstage, a theatre camp at Mississippi State University in which a group of junior high and high school students write a three act musical comedy (or three one act musical comedies) in the space of one week and then co-star in that musical at the end of the three week camp. I took some years off, from 1998 to 2007, and came back as an act leader and, eventually, the writers camp script coordinator. It’s consistently one of the more stressful things I ever do in terms of the workload and the deadline, but also one of the most satisfying in terms of getting to see pure creativity at work on the part of the kids in both the writers and production camp aspects. They get it done every year and I sometimes get to be there to help suggest stitching for any small tears in the narrative fabric. (There are not that many. And for every suggestion I make, the camper writers almost always come up with something way better.)

As part of camp, during the third week we have a tradition called Secret Pal. (It’s like Secret Santa, only in July.) Campers and staff draw one another’s names from a hat and are then tasked with giving the person they drew some little gift or card each day, which they either bought or made. It’s just sort of a nice daily pick-me-up during the energy-sapping third week rolling into production.

In 2013, or so, my secret pal had my number in terms of an ideal gift. Not only did they learn of my obsession with TARDISes (maybe from spying one in my room on the staff hall or maybe from the many TARDIS t-shirts that I sported), but they made, with their very own hands, a paper TARDIS which they gifted to me on the sly by leaving it for me in the camp office. I actually spied through the office door as I came around the corner, recognized what it was, and instantly knew who that paper TARDIS was meant for. 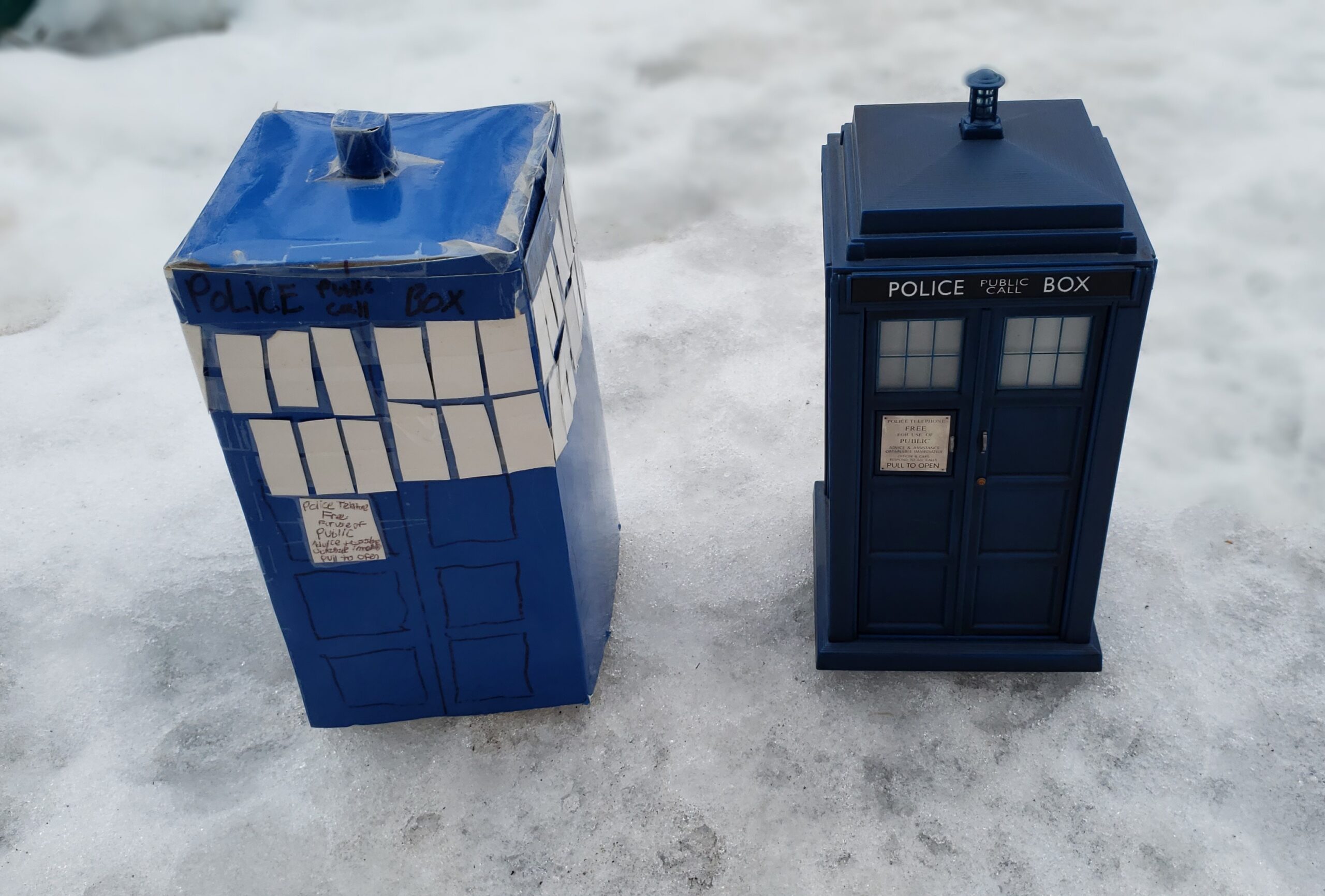 Making a TARDIS of any sort is always a tricky prospect. While the basic shape and features are fairly consistent (except when they’re not–I’m lookin’ at you Patrick Troughton TARDIS with the door sign on the wrong door), there are loads of details to take into account and only the most foolhardy soul would attempt it without a visual reference. I don’t know if mine was made with one or not, but it’s impressive either way. A rectangular box made of thin cardboard, akin to cereal box packing, the TARDIS has individual windows applied, also cut out of cardboard, and pasted onto the surface. And on its roof was affixed a lamp, also in cardboard. Most other details are drawn on in ink. It’s not a small thing, either, coming pretty close to the same scale as the Electronic Flight Control TARDIS, which was the very TARDIS I’d brought with me to camp.

If the title of this post didn’t already spoil it, at the end of camp, my secret pal revealed themselves to be none other than my fellow staff member and friend Nick Bell. Nick’s one of the nicer guys I know and was among the first campers I was privileged to work with upon my return to Summer Scholars, some years earlier. His TARDIS remains a treasured member of my TARDIS collection to this day.