One of my best friends growing up, John Underwood, was known for three things:

You may think that I am exaggerating, but I tell you that, in the Underwood home, there was not a single item smaller than, say, a coffee table, that did not have a specialized cozy to cover it. Some cozies were crocheted. Some were quilted. Some were macraméd. Many were themed to whatever holiday fell during that month. The toaster had a cozy. The tea kettle had a cozy. The bread box had a cozy. The VCR had a cozy. There were picture frames in which the picture itself, while still visible, peeked out from within a cozy. In the winter, we joked that John wasn’t really wearing sweaters so much as John cozies. (And if John’s mom could place a cozied item on top of a doily, I think she got extra points, or something, cause there were a lot of those too.) Ubiquitous among the cozy-covered items, however, were the Kleenex boxes, of which there were… I’m gonna say at least 78. In my memory, there was a box of Kleenex atop every level surface in the house, and each of those boxes was clad in its own cozy. They were ever-present.

As youths, those of us among John’s friends were never super clear if all of this cozy-cladding was done out of some sort of embarrassment that visitors might be exposed to naked items sitting out on tables, or if Mrs. U just feared they would catch a chill. But if it was warm and snuggly Kleenexes that you needed, they were guaranteed to be found at chez Underwood

(I should note that Mrs. Underwood is a fantastic lady in all other respects, played a huge role in helping set me on the path to becoming the playwright and actor I am today, and always treated me as part of the family. But I made no bones to her at the time that she was in need of a cozy intervention.) 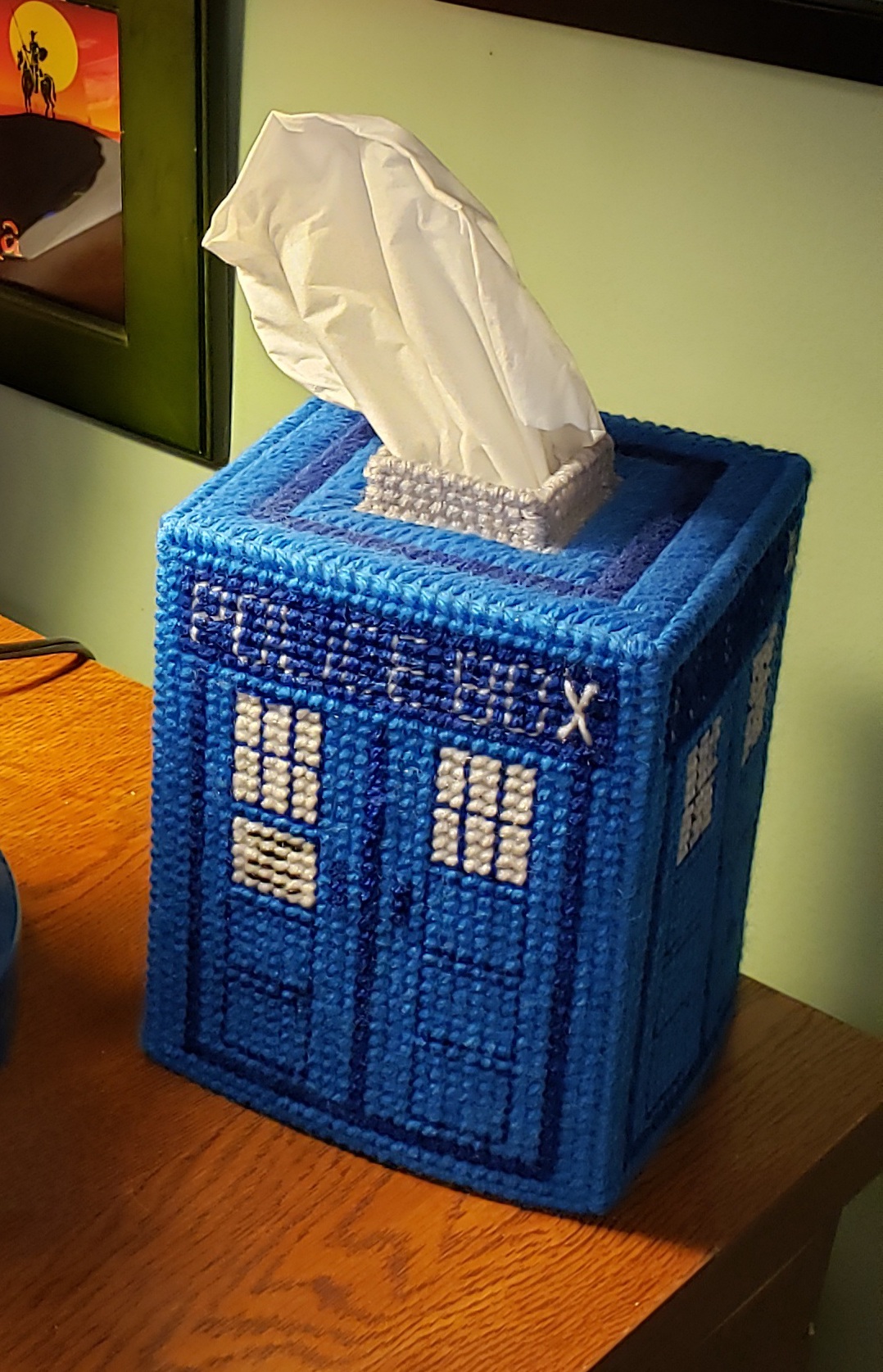 Imagine my horror, after decades of ridiculing the cozy-wrapping practices of my betters, when I happened to be browsing Etsy one night and spied a cozy that I knew I had to both own and display. Yessir, the TARDIS Kleenex Cozy caught my eye and I was unable to prevent my finger from pressing the purchase button for longer than a week.

It soon materialized in the mail. And, I am ashamed to say, it was delightful.

The design is your standard yarn-woven-through-plastic-grid tissue box cozy, mind you, but done up in TARDIS-colored yarns, and with a keen eye for detail in terms of capturing the essential elements of the TARDIS. You’ve got your Police box sign above each side (though leaving off the “public call” part for space considerations), plus the door sign (with implied text). Even the levels of the roof are taken into account through the use of varying shades of yarn. The cozy fits over the taller, squarish tissue box in the brand and style of your choice. I really dig it and it now resides on my desk, next to my TARDIS Bluetooth speaker lamp. Mrs. Underwood would be proud and encourage you to find your own at etsy, courtesy of IrishKitten.

Of course, having learned my cozy lesson somewhat… looking around my office, I note that the number of TARDISes I own could almost kinda constitute something of a… TARDIS shrine, of sorts? Really gives one pause to consider that maybe I should also not be so cavalier in lobbing stones at the Bat-shrines of friends. Sorry, John.