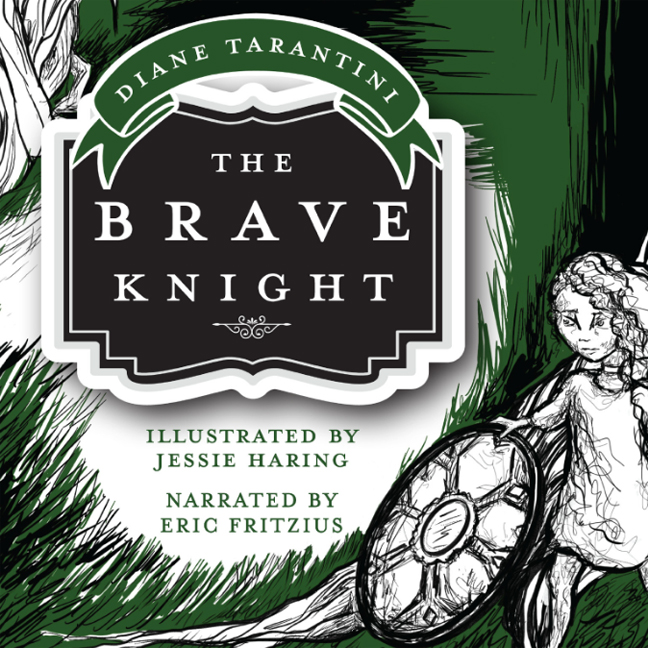 My latest audiobook collaboration, The Brave Knight, by writer Diane Tarantini and illustrator Jessie Haring, has just been published via Audible and Amazon. The book is an important children’s story that aids parents to introduce heavy topics, such as bullying and abuse, to their children in an engaging and uplifting way. I’m proud to have lent my voice to it, as well as to be able to work directly with Diane on it, who was able to voice her own main character for the book.

Find it at Audible.com and Amazon.com.

My audiobook narration of The Archer’s Cup, the third book in S.D. Smith’s Green Ember Archer series, is now on sale through Amazon and Audible.

I had a great deal of fun recording this, because, as always, Smith’s characters are just so enjoyable and challenging to voice. In fact, I’d say two of my favorite character lines to have ever recorded are found within this book. (And if, after listening to it, you can tell me what either of those two lines are, you’ll win a prize.)

Being the third in the series, you should first listen to The Last Archer and The First Fowler. But to really know all the characters as well as their situation, you should, of course, hear Joel Clarkson’s narrations of Smith’s entire Green Ember series. The Green Ember Archer side-stories fall within and impact the framework of the larger Green Ember story.

I hope the series continues into further books, if only so that I get to bring back Matron Wilder, who is one of my favorite of Smith’s villains.

In this sequel to The Last Archer and The First Fowler, Jo Shanks is charged with aiding Emma on her mission to unite the secret citadels in their fight against the Preylord slavers. Alongside Cole and Heyna Blackstar, Jo and Emma must enter into the heart of a community in confusion.

Something is wrong at Blackstone Citadel. Can Jo and his friends solve the mystery and enlist Blackstones aid in time to rendezvous with their allies fighting for the Mended Wood?

A citadel on the edge.

An insidious mystery to unravel.

Who will target the terror?

How to Carry Bigfoot Home

It is a collection of beautiful, funny, bittersweet, and (in the case of one of them) Pushcart-nominated tales for adults.  It was a fantastically fun project to work on.

Please be so kind as to check it out on Amazon.com, Audible.com and (coming soon) to iTunes.

How to Write a Bigfoot Review

I’m pleased to link to Phyllis Wilson Moore’s review of my audiobook narration of the short story collection HOW TO CARRY BIGFOOT HOME in the latest issue (#200, in fact) of Meredith Sue Willis’s Books for Readers e-newsletter.

Hear a sample of the audio at this link…

It is a collection of beautiful, funny, bittersweet, and (in the case of one of them) Pushcart-nominated tales. It was a fantastically fun project to work on.

Please be so kind as to check it out on Amazon.com, Audible.com and (coming soon) to iTunes.

That feeling you get after you’ve spent half an hour editing the first few minutes of an audiobook file you recorded four days ago only to then hear your own voice on the recording say “Yeah, I kinda want to do this thing all over again,” followed by sounds of coffee drinking, the humming of a solid note for several seconds designed to visually mark the recording to signal your future self as to where to begin the edit, and then your own voice starting the chapter anew.

It’s only due by Friday.

With my latest audiobook narration Mississippi Nights freshly released, I want to draw your attention to a future release coming later this summer.

I am currently recording the narration for the audiobook of How to Carry Bigfoot Home, by Chris Tarry.  I can safely report at this point that the stories within are just as impressive, funny, heart-breaking, and poignant as you would hope for a collection with a title like that.

Which is to say, it’s fantastic and I highly recommend it.  The style of the stories varies greatly between each, but Tarry always has a clever turn of phrase, with equal parts comedy and tragedy, often within the same story.

It has also been one of the more challenging audiobooks I’ve recorded, as I’ve had to learn how to approximate a few different accents that I’ve never attempted before (Newfoundland Irish, for instance.)  My hope is that they will be true to the emotions of the characters at all times, slavishly accurate secondarily, but I’m aiming for both.

If you enjoyed my own, A Consternation of Monsters, you’ll love this.

Look for How to Carry Bigfoot Home in August 2018.

I’m pleased to announce that my latest effort as an audiobook narrator, Mississippi Nights by D.M. Webb, is now available.  It’s a Christian fiction romance/thriller set in my home state of Mississippi.

I had a lot of fun narrating this because, in addition to getting to voice some colorful characters, I was impressed at the how the author deftly and playfully lampoons many of the tropes of the Nicholas Sparksy-style romantic fiction genre while still writing a legit romantic thriller.  I also appreciated that the book tackles some serious real world issues in a way that does not suggest easy answers to the problems.

I can also report that it got a little dusty in the ol’ recording booth at times, as I, the narrator, was sometimes unprepared for the emotional impact of the story.  (While I admit to bawling my eyes out watching movies, I rarely cry reading books.  This one got me more than once.)

MISSISSIPPI NIGHTS–  Two brothers, one death – the bond of brotherhood and family faces its greatest challenge. When firefighter David Boyette’s fiance perishes in a car accident, he blames his brother, Sgt. Jeremy Boyette, for her death.  Three years later, David returns home with a dark and devastating secret. With the help of family, a woman’s love, and a child’s devotion, can David overcome insurmountable odds as he and Jeremy face the bitterness that enslaves him?

Mississippi Nights is available through Audible.com, Amazon.com, and iTunes.

My latest effort as an audiobook narrator, The Last Archer, by S.D. Smith, is now on sale.  It is set during the events of Smith’s Green Ember series, but tells a side story to those events with some new characters and a few familiar faces.

You don’t have to have read the Green Ember series to enjoy this story of rabbits with swords (or, as is often the case, bows), but I recommend you read them anyway cause they’re great. (Or pick up the audiobooks for those, narrated by Joel Clarkson.)