The Talkin’ Milk & Cheese Vs. the TSA Blues (an Air-Travel Horribly True Tale) Just got back from visiting my sister in Austin.

In addition to eating like an asshole, as is my Austin tradition, I also had the traditional visit to Austin Books & Comics, my favorite comic shop in the whole wide world. If you can think of a graphic novel or comic book trade paperback collection, chances are quite high that Austin Books & Comics will have multiple copies of it in stock. They also have a huge supply of statues, toys and figurines to keep your inner geek happy for decades.

While there I happened to spy a set of vinyl figurines cast in the shape of cartoonist Evan Dorkin’s most famous creation Milk & Cheese. For those unfamiliar with Milk & Cheese, they’re dairy products gone bad, known for their hatred of most things that aren’t alcohol, mindless violence or the late TV show A Current Affair. (They once engaged in a successful two man war on drugs because they were tired of the anti-drug commercials interrupting their viewing of A Current Affair.) I love the characters and own every one of their comics, most of which are #1 issues. I also have both the flat illustrated Milk & Cheese refrigerator magnet set, but also the now rare three dimensional porcelain magnet produced by Graffiti Designs in the late 1990s. (Oooooh, ahhhhh.) Until that moment, though, I’d only seen pictures of the Milk & Cheese figures, as they were produced several years ago and in limited supply. Another reason I’d never seen them in person is because they cost around $70 at the minimum when they were first released and I was still smarting over the cost of the porcelain fridge magnet. Because of this, I had no idea how huge the figures are. The photos I’d seen didn’t really give any sense of scale, so I’d assumed that Milk was probably smaller than the typical smallish carton of milk and Cheese a smallish wedge of cheddar. The figures were easily twice the size I had expected, though. They came packaged in a huge foot and a half long box decorated with Milk & Cheese comic strips. The display of the figs in the shop listed them for the usual $70, so I still wasn’t going to bite. However, on further exploration into the toy section of the store, I saw that they had a endcap display of them that had the sets listed for $30 each. I figured they must be a former display model, or something had to be wrong with them to be at that low a price. But when I asked a clerk he said that the figs were dairy products reduced for quick sale because the store had bought too many sets. So I bought a set for $30. 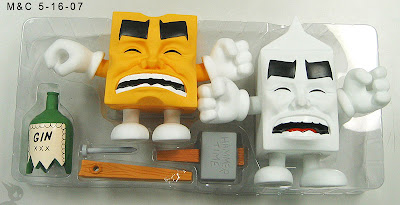 Inside their box, Milk & Cheese are nestled securely inside a bagged, plastic vacuform insert along with their weapon accessories: a plastic broken gin bottle, a large plastic hammer, and a plastic stick with a plastic nail through it. I left everything in its place, didn’t even crack the seal on the plastic bag and put it all back in the box. For a bit I considered shipping the box to myself in WV, saving me the trouble of packing such an enormous item in my check luggage. I also considered collapsing the box and packing the figs loose within my clothing. Then I changed my mind and instead packed the full box into my carry on gym bag since it was light enough that it wouldn’t be a hassle.

On Saturday, we headed to the airport, checked our check bag and proceeded thorough the TSA security line. We did the whole remove all metal and run your carry on through the x-ray machine bit. I made it through the security screening before the bags and was able to look back at the x-ray display screens while I put on my shoes. On the screen was what looked like my satchel, at least from the snake nest of media cables I could see. I was sure this would take them a few moments to suss out. But it was actually the gym bag that they’d paused the conveyor belt to examine in depth. The tech stared at the x-ray. Then stared some more. Finally, he called one of the TSA officers over and said something to her before starting the belt again. My bags came rolling out.

“Whose bag is this?” the TSA lady asked pointing to the satchel.

“This is your bag?” she asked.

“Sir, do you have any glass products packed in here?”

Then the TSA agent seemed to look at the satchel for a moment, perhaps listening to someone speaking to her in an earpiece, for she then said, “No, this isn’t the bag.” She slid the satchel to me in its plastic tray. Then she pulled the tray containing my gym bag close and said, “Whose bag is this?”

“This is your bag?” she asked again.

“Sir, do you have any glass products packed in here?”

“Not that I’m aware of,” I said again. Did I, though? We had been to a Penzeys Spice store and had loaded up on little glass jars of curry powder and peppercorns and what not. But I’d definitely packed those in the check bag.

“You don’t have any glass products?” she asked again, now with suspicion.

Another pause and perhaps another listen to a voice in an earpiece.

“Sir, do you have any figurines in here?”

The TSA lady unzipped my gym bag and there at the top was the long Milk & Cheese box. She removed it from the bag, nosed around in the clothing that had surrounded it, found nothing made of glass, figurine or otherwise, and then began the process of opening the Milk & Cheese box itself.

“Um, technically I guess there is kind of a bottle in there,” I said. “But it’s a fake plastic gin bottle,” I added. I didn’t mention that the fake plastic gin bottle was sculpted to appear broken, nor did I mention the fake plastic stick with the fake plastic nail through it, nor that their accessories were supposed to represent weapons. By then she had the box open and had pulled out the plastic bag-covered vacuform insert with Cheese and Milk (that’s the order they’re packed in) staring up at her baring expressions of malice on their little Dorkiny faces, their hands clinched in fists of dairy fury. The TSA lady blinked down at them for a few seconds as though what she was seeing didn’t compute. At least they’re not flipping her off like my Milk & Cheese magnet, I thought. Then she smiled and said, “Oh, it’s a game!”

She took the insert over to the x-ray tech to show him “the game.”   He seemed to approve, or at least not deny. She then repackaged my toys and zipped up the bag, after which I gathered my possessions and made my way over to where my wife was standing, shaking her head.

“Apparently Milk & Cheese caused some problems with the TSA,” I said.