As I’ve previously written, I came to my fandom of Doctor Who in the summer of 1980, in small town Mississippi, where I felt like I existed in something of a Doctor Who fandom vacuum. In the years before the internet, the ability to research a television show, let alone one from a foreign land, was kind of limited. At the time, having seen only a handful of Tom Baker stories, I had no idea how long the show had even been on the air. I had no idea that there had been other Doctors before Baker, or, indeed, a 5th Doctor impending. I had no idea that there were novelizations of episodes in the world, or that books about the show itself had also been published. I’d never even heard of a Dalek, cause I had missed “Genesis of the Daleks” during its initial PBS run. My first ever episode to see was mid-way through “Revenge of the Cybermen,” the story falling immediately after “Genesis of the Daleks”. I was a babe in the Whoniverse woods, trapped in the deep south, where we only got the show at all by the grace of the God of Public Television and a long-handled spoon. But I was definitely hungry for more.

Being in the 4th grade during my initial viewing, I longed for Doctor Who toys, yet, again, had no clue that such things already existed elsewhere in the world. It would be years yet before I learned of the Denys Fisher TARDIS of the 1970s and years yet before the Dapol TARDIS toy was produced. Yet I would have given anything at that age to have my own TARDIS toy. Which was why, a few years on, I was shocked the first time I caught sight of a Doctor Who Tom Baker Tardis Tin Bank. These were first produced by the Avon company in 1980 as fairly simple metal lidded boxes of a rectangular TARDIS-like shape, with a printed TARDIS exterior featuring an illustrated open door with Tom Baker himself standing in it. There was no three dimensional lamp on top, but just an embossed metal lid with a circular raised section painted as if light were pouring from beneath the rounded blue disc. (I expect it’s meant to be thought of as the TARDIS roof as seen from directly above.) By no means was this a toy TARDIS, but for a kid who was easily able to use his imagination to transform his Dad’s girlfriend’s cream-colored muffler into a full-length Doctor Who scarf in his head, it wasn’t a far stretch at all that I might yet be able to use such a tin as a toy, I thought. 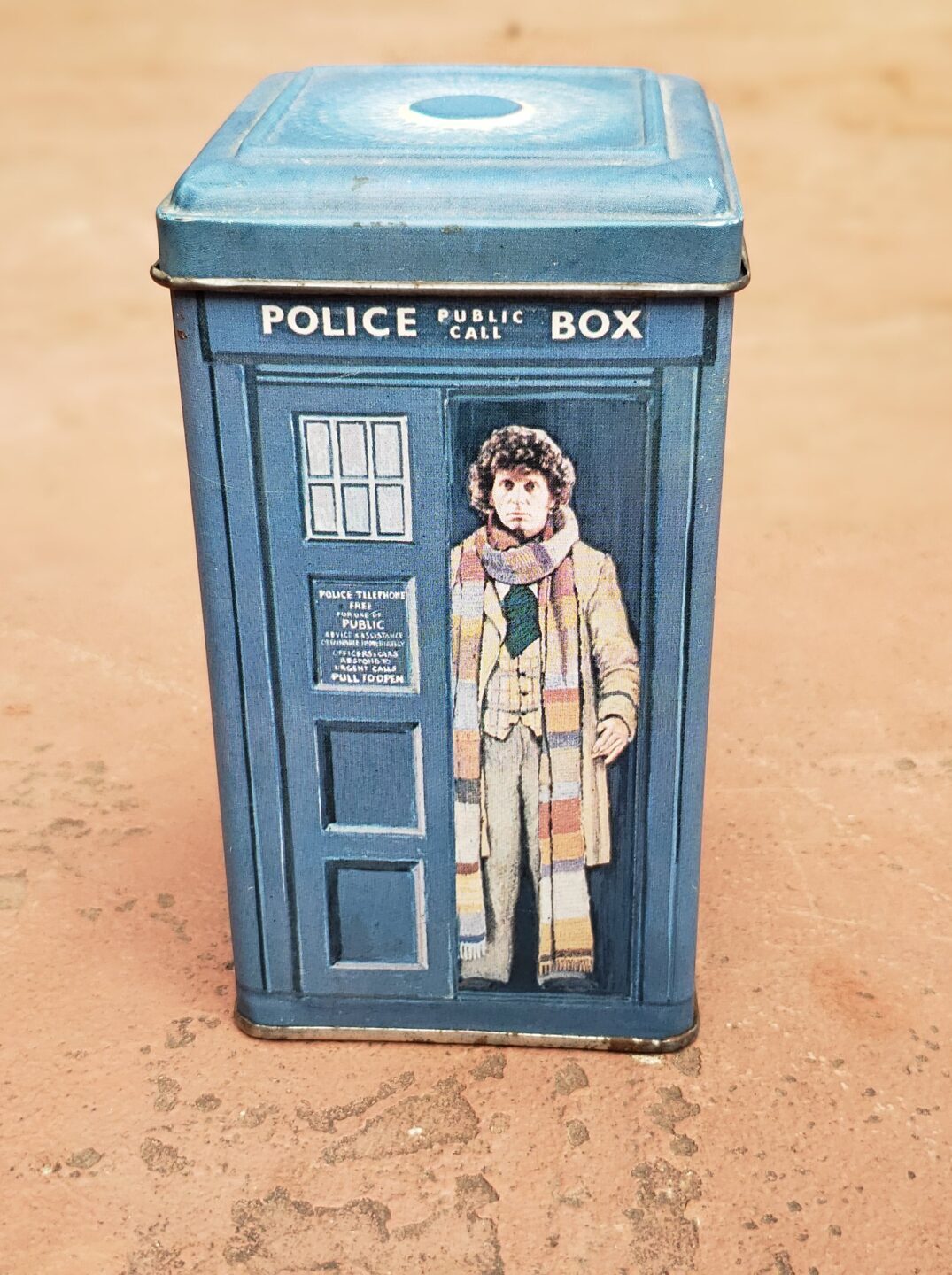 Now, you’d think for such a powerful memory of wanting one of these, I’d be able to remember exactly where I first saw one. Not… as… such.

Part of me wonders if I first saw one at the house of some acquaintances of my dad’s, whose older son introduced me to the concept of the Doctor Who Target novelizations. That would have had to have been around 1982, or so, that I first saw the tin, and I think we visited those folks around then. However, if he’d owned such a tin, he certainly didn’t let me lay hands on it. Instead, I suspect that the tin might have been something I first spotted in a comic book store–possibly among the first two such stores I’d ever visited, both of which were within a block of one another, in Tuscaloosa, Alabama, and both of which are no more. The more likely shop I might have seen it in was called Injun John’s, which was a newsstand/comic shop/tobacconist/porno mag emporium. I can still remember the smell of the place, which was always a heady blend of tobacco and newsprint. Asgard Comics was more of a traditional comic book store. I bought my first two issues of Marvel’s run on Doctor Who there.

Or, perhaps I saw the TARDIS tin at Memphis Comics and Records, which was another shop I would frequently convince Dad to take me to, on the way to see my grandparents in Missouri. Or maybe at any of the handful of comic stores I visited while on summer time road trips. (Though not, I should add, at the very first comic shop I attempted to visit in New York City–a story for a future entry.)

Wherever it was that I spotted one, it was in person and was distant enough that I couldn’t get my mitts on it. (I can recall seeing the first issues of Watchmen there in 1986, so why can’t I pin down the tin? It’s maddening!) 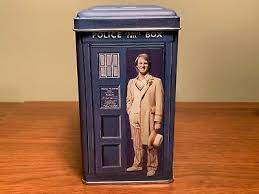 Years later, while visiting my friend Matthew Jameson, who lived in Huntsville, AL, I spied another similar tin. This time it was owned by Matthew’s father, and was not a Tom Baker tin, but a Peter Davison 5th Doctor tin bank. This tin Mr. Jameson let me examine up close. It looked the same as the Baker tin, but with Peter painted in the doorway instead. (Fun fact: Peter Davison is the only Doctor Who actor I’ve met in person, so far, and whose hand I have shook. And the entire time I was doing so, all my brain would spit out was “That’s #&%!ing Doctor Who!”) I was not nearly as enchanted with the fact that Peter Davison was on the tin, but it was still a TARDIS. By that time I was in high school, so seeking a toy TARDIS was not yet back on my radar of things a boy my age should be doing. I’d have to wait until I was well into my 30s for that desire to kick back into gear. And soon after it did, I made the mental note that one day I wanted to own such a classic TARDIS tin like I’d wanted as a child, preferably with my boy Tom on it. However, I found in my ebay searching that such tins had become rare as the old ones rusted away and got recycled. As such, it became one of my White Whale TARDISes. I occasionally would still look for them on ebay, but they tended to go for dozens of dollars more than I really wanted to pay for a metal box. I bided my time.

Back in May of last year, I finally located one in an ebay auction. For some reason, it was only listed for $19.98, or, at least, that was the price I paid as the winning bidder. I worried that perhaps this was some sort of knock-off TARDIS tin, due to its cheapness. Perhaps there was something wrong with it. But I paid my money and took my chances.

When it arrived, it was somehow smaller than my memory of the ones I had seen previously. Of course, I was relatively smaller at the time I saw them, too. However, I’ve looked up several listings for similar tins and the measurements match those of the one I have. And if it is still somehow counterfeit, the counterfeiters did a fine job of aging it, for there was rust to be found around the edges of the inside. A little elbow grease cleaned it right up. It looks like a true 1980s-era item. I also don’t really care if it is of more recent manufacture. It’s awesome and now has a proud place on my office bookshelf. I give it four TARDi.