One of my major regrets in my TARDIS toy collecting is not buying the original Character Options 4th Doctor Electronic flat roofed TARDIS when it was first released, back in 2011. (The didn’t call it a flat-roofed TARDIS, but that’s what it was.) At the time it was a bit outside my price range and difficult to find. I eventually managed to get my hands on a far cheaper 7th Doctor Electronic TARDIS a couple years on. (You can read about that purchase as well as a brief history of the CO Electronic Classic TARDIS line HERE.) r 7th Doctor TARDIS from the same line. And while I was fine with imagining that the 7th Doctor Electronic TARDIS was really a pitched roof 4th Doctor from Baker’s later seasons, I really wanted the flat roof model.

Which is odd, because I never really liked the flat roof model when compared with the stacked roof models from before and after its use during the show’s run. In fact, I go so far as to say that I hate it in the above linked entry. Hate is such an ugly word, though. I can attest that since penning the entry on the 7th Doctor’s TARDIS, I have actually warmed up to the flat roof TARDIS design quite a bit. For one thing, it was the primary TARDIS design during a good chunk of the Pertwee and Baker runs, so I can’t really hate it, even if I prefer the stacked look more. 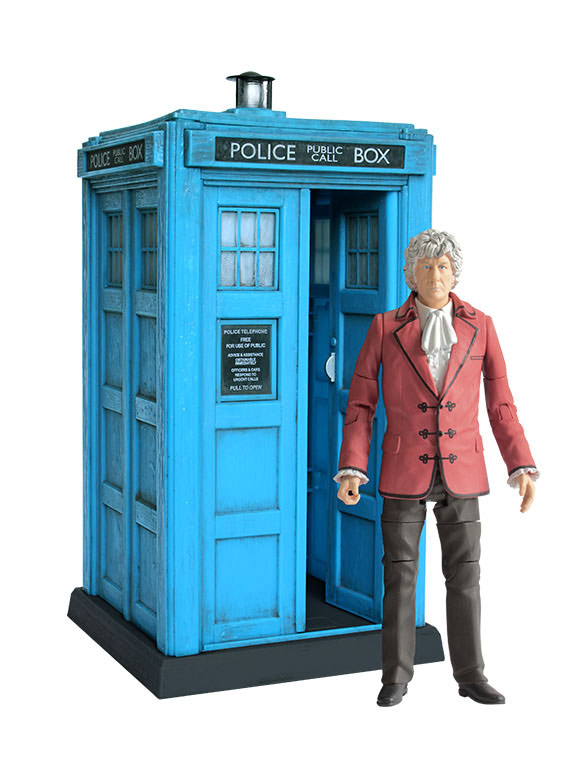 When Character Options teamed up with B&M Stores in England, a few years back, to produce some B&M exclusive toy sets, they announced they were going to include a 3rd Doctor TARDIS. From the photos they included with the announcement, it was clearly just a repainted version of their 4th Doctor TARDIS mold, complete with dingy greenish blue paint job (which looks far more like a day-glo blue in the image they released), dark door sign, and flat roof. I really dug the look save for one feature: the base of the TARDIS was painted black. Having not watched much of Pertwee’s run (which was largely TARDIS-free for his first three seasons), I didn’t recognize this TARDIS as one from the show. To that point, I’d never seen even a still of a black-based TARDIS and, having tried mightily to find one today, can’t. 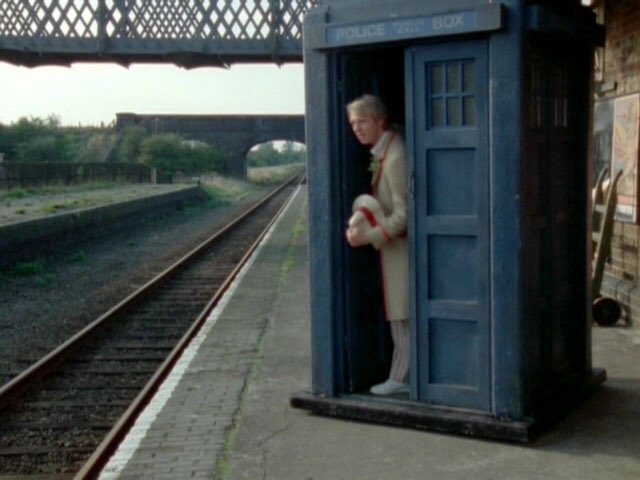 I did find one during Peter Davison’s run, so apparently the black base returned at some point. Considering that the TARDIS isn’t always shot in full, though, meaning we don’t often see the base at all, the show could have used black based TARDISes for several Doctors and we’d not likely know it. One of the actual B&M 4th Doctor TARDIS releases even has a black base, suggesting it must have in the show at some point. (This was, in 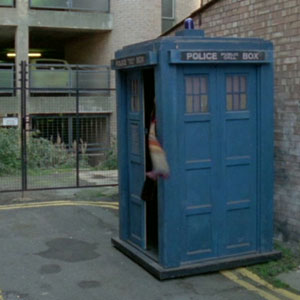 fact, the SHADA TARDIS release, which also had the blue dome light on top, instead of the lantern-style.) Regardless of its on-screen accuracy, I didn’t care for the black base in any era.

(I should note at this point that I already own a black-based police box model, the Hornby Skaledale Blue Police Box model, featured in 2018’s Shotglass TARDIS series. I only happened to notice it recently, though, while writing a new shotglass-related entry.)

I found a fairly cheap 3rd Doctor B&M TARDIS second hand on ebay. In fact, while it came in its original packaging, it was without its John Pertwee figure. I knew this from the listing description, though, and didn’t want him anyway. I already have a Pertwee from the 11 Doctors figure set, so what do I need with another wearing a red jacket with frilly cuffs instead of a green jacket and MacIntosh and frilly cuffs? I was pleased to find that it was not day-glo blue, as had been pictured, but the traditional greenish dingy blue of the Pertwee/Baker era. I immediately set about to “fix” the black base on it by adding more dingy greenish blue paint to the base, covering it up. I also further transformed this into my dream 4th Doctor TARDIS by adding an interior card that matches the steampunk, wood-paneled auxiliary control room of the early Baker years–which remains my all time favorite console room style to date.

As far as TARDIS toys go, I really like it for the most part. The detailing and paintwork make it feel exactly like it came from the era it claims to represent. The sculpt of it is basically the exact same mold as the 7th Doctor’s TARDIS (a.k.a. my other 4th Doctor TARDIS), but the roof cap is switched out for the flat model for this one. However, as a functional toy, this one is far from perfect.

While the B&M TARDIS sets use the same molds of the earlier Electronic TARDIS releases, repainted for new purposes, they are now stripped of their electronics entirely, meaning no light up roof lantern, no interior lights, and no sound effects whatsoever. And just to turn that cheapness knife they stabbed us with further in the wound, they left the back side battery panel in place, complete with speaker holes above it. Every time I see it, I am fully aware of what this toy COULD have been had whichever party was responsible for being a cheapass not decided to be a cheapass. Sure, I’d rather have this TARDIS than not have it, and if leaving out the electronics was the deciding 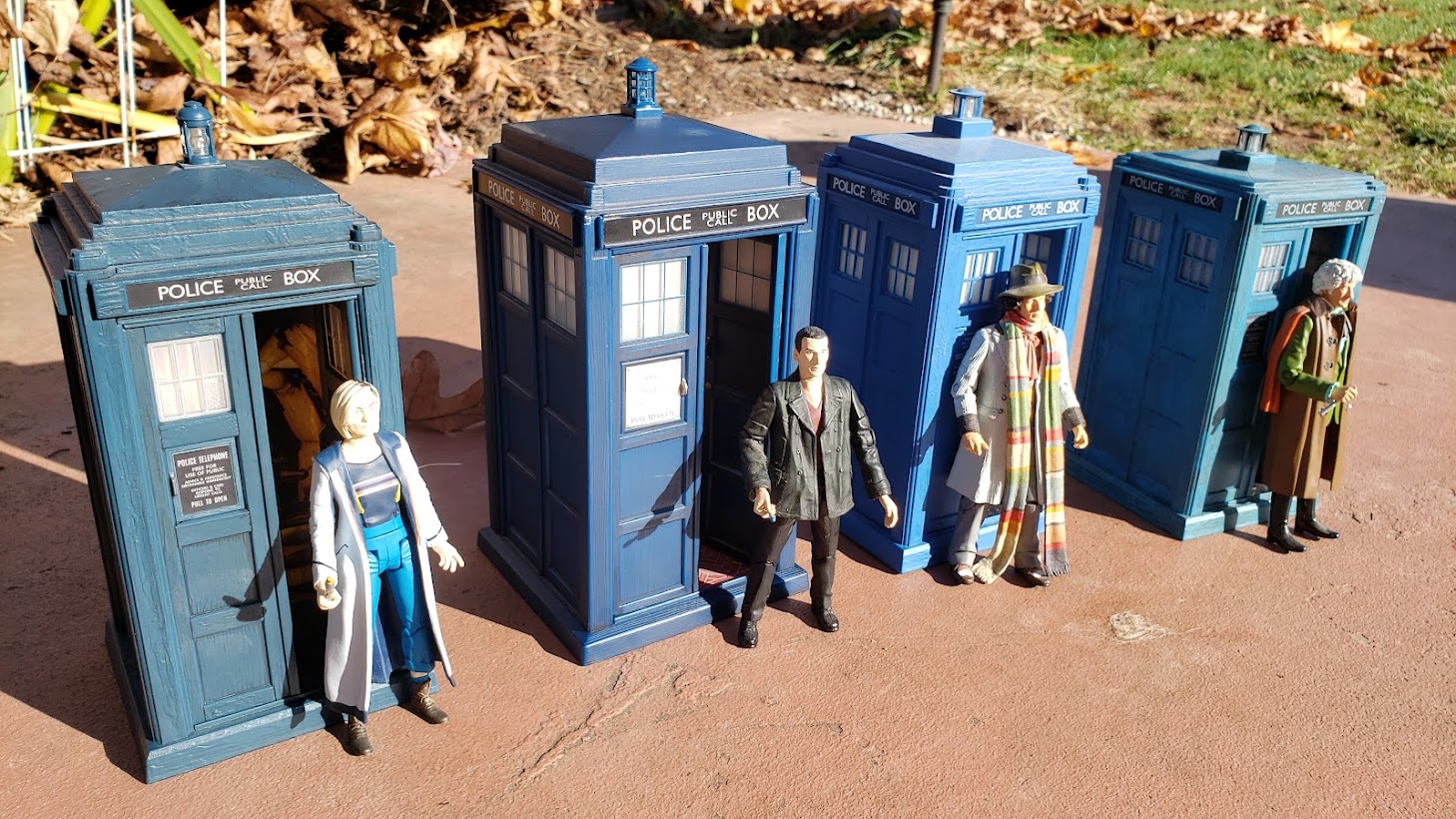 factor then I guess I’d rather live in a world in which I get my TARDIS. It’s not like I spend a lot of time activating any of the sounds and lights of any of the other TARDISes I own anyway. But I lament that we could have had something truly special if not for profit margins.