My mother-in-law, Susan “Bad Sue” Holloway, has been the supplier (some might say enabler) of many of my more unique TARDIS collection items. As previously chronicled, she not only knitted me a full-size Tom Baker scarf, but later bought me my TARDIS cookie jar and quilted me a TARDIS console mug coaster. But there are many other TARDIS-related gifts from Ma that have become treasured items in my TARDIS collection which I look forward to chronicling here. 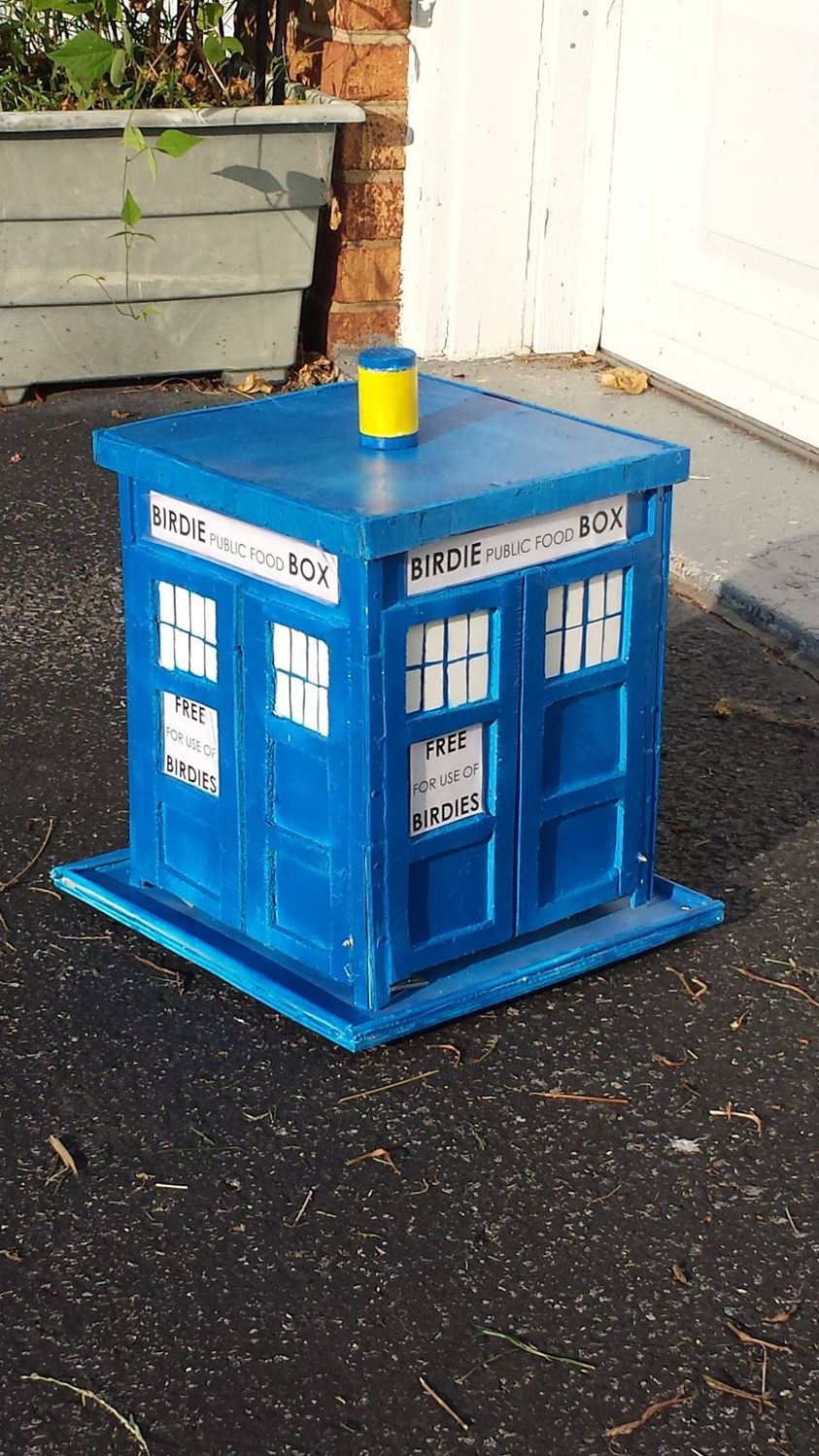 Today’s entry, most unfortunately, no longer has a treasured place among my collection, mainly because it kind of got ruined by the weather and now lives in the garage. It’s a TARDIS Bird Feeder which my mother-in-law made with her very own crafty hands. She sent it to me with the caveat that it wasn’t very good and that I was welcome to throw it away if I liked. This was no reflection on the piece itself, other than it probably didn’t turn out as good as Ma had wanted, but she was going to go ahead and give it to me until she could make a better one.

Constructed from thin plywood, this TARDIS bird feeder is a squat box container, hollow on the inside but with slots at the bottom to allow for seed within to spill out onto the lip of the wider base. The base itself has a raised edge to hold the seed in place and to provide birdy’s with a perch from which to eat. The sides of the box are fitted with glues on strips of wood forming the door panels. Ma added “Birdie Public Food Box” signs above all sides as well as door signs on all four sides. (I’m not sure she knew the door sign was only on the front, but whatevs.) Now, granted, the windows on each side have twice as many panes of “glass” as the real TARDIS. And atop the box’s lid was a yellow and blue cylinder for the lamp. It’s impressively detailed and cleverly assembled, even if there were a couple of screws poking out the bottom that posed a risk to anyone trying to pick it up. I also suspect Ma didn’t have solid photo reference for the whole project and wound up winging it some of the time. However, I loved it and declared it to be too good for birds and that I was going to fill it with Chex Mix and keep it in my office.

Alas, it never saw Chex mix either. I wound up moving it to a pedestal stand and parked it in one of our flower beds for a photo session. And there it wound up staying, eventually getting filled with actual bird seed and being used for its intended purpose. And thus the tragedy ensued, because the TARDIS birdfeeder was not precisely weather-proof. Within weeks, I could see some of the plywood begin to peel up. By the time I removed it from the flower bed, the TARDIS birdfeeder had begun to resemble a miniature version of the giant ruined TARDIS on Trenzalore. Ma didn’t mind. She was all for letting the elements have it and starting anew with a better version of it. However, I wound up removing it to the garage when we took the bed down for winter and it has not rematerialized since.