A Consternation of Monsters, of moths and men

artist’s rendition of The Mothman

Since the first episode of the Consternation of Monsters Podcast adapts my story “…to a Flame” I thought it would be good to kick off the blog entries about the stories in the collection with that one.

The original short story version of “…to a Flame” began life in the early mid-oughts as a story prompt given to me during an eight-week  writing workshop taught by writer Belinda Anderson.  Her prompt was simple: your character finds a dead body.  Now, the story did not fall into my head at that moment, as other stories have on occasion.  In fact, the basic kernel of it didn’t pop until I was on my way home from class.  It was about 9:15 at night, foggy, dark, and I was driving up Highway 63, a stretch of road which winds its way along the side of a series of hills that rim a bowl valley.  There was a curve in the road not far from our neighborhood.  As I began to round it, I imagined a circumstance in which I reached the other side of the curve and found not just a dead body in the road, but the dead body of a mothman.

Now, for those of you who’ve not yet read the story or have not yet listened to the podcast: A) shame on you; and B) you may or may not be familiar with the legendary Mothman of West Virginia.  I, on the other wing, have been from an early age.

Let me back up.

As a kid, I was a huge cryptozoology nerd.   It started the day my dad showed me pictures in a magazine which were of underwater images from Loch Ness reputed to be of the monster that lived there.  He seemed pretty convinced that not only were the photos the genuine article, but that the Loch Ness monster was, in actuality, a plesiosaur–an aquatic dinosaur that supposedly died out 205 million years ago.  I didn’t know the 205 million years part then, but the idea that a dinosaur might still exist in the world was delicious.  From that moment on, I devoured every book I could find about our world’s mysterious monsters.  (Which, now that I think about it, is a fact that would have been appropriate to have mentioned in my dad’s part of the dedication at the front of my book, but I digress…)  From Loch Ness, to the Yeti, to Bigfoot (one of which had been famously sighted as close as Arkansas, which put it in my neck of the country), to giant squid to… the Mothman.

I didn’t think that much of the Mothman at the time.  Sure, a flying, winged man (which is what the image in the book on American monsters in my 5th grade library depicted him as) is definitely intriguing, but the whole mothman tale itself was a slippery customer for a 5th grader to catch.

The broad strokes of the story is that a winged and frequently flying creature was reported to have been sighted in the area of Point Pleasant, W.Va., from late 1966 to December of 1967. During this time there were also a lot of UFO sightings as well as appearances by men dressed in black suits who supposedly turned up–driving black cars, naturally–to behave oddly, threaten witnesses, and generally muddy the waters.  (The whole concept of the Men in Black, while not originating with this case, was certainly shored up in paranormal cultural awareness by their reported appearances during that year.)  The year of sightings culminated in the December collapse of the Silver Bridge, spanning the Ohio river, killing 46 people.  Some people tied the Mothman’s appearance in the area as a harbinger of this disaster.  After that, there were reportedly no more sightings of the creature.

I wasn’t a big fan of the mothman story as a kid.  There were just to many moving parts to it for me at that age.  I liked the idea of the Men in Black, though, but the creature and the harbinging of doom was more difficult for me to grasp than the idea of a missing link hominid wandering the forests of the Pacific northwest.  The mothman, therefore, was not even in my top five favorite monsters and I didn’t even bother to read the textbook on the case, The Mothman Prophecies, by John Keel.  But the ideas of the Mothman incidents stuck with me. 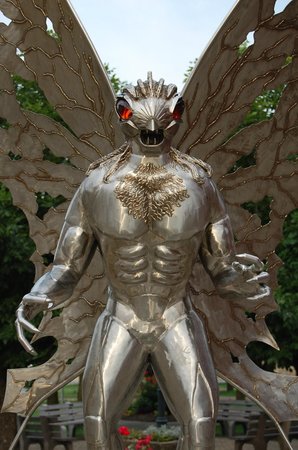 statue of the Mothman as it appears in Point Pleasant, WV, today.

Cut to 2001.  My wife and I were about to move to West Virginia and before we could even leave our former home of North Carolina I was looking up how close to Point Pleasant our new home would be.  This wasn’t so much because I remembered that the case took place in West Virginia, but more because I had heard there was a Richard Gere-starring adaptation of The Mothman Prophecies that was soon to be released and that brought the whole West Virginia connection back to front of mind.  If I was going to share a state with a monster, I wanted to know where he hung out.  Not real close at all, it turned out, as Point Pleasant was 160 miles away from where we were moving–a nice buffer.  What surprised me when I started looking into the case again, though, was that Point Pleasant took the legends very seriously–at least to the extend that they were trying to capitalize on tourist trade from it and had recently erected a Mothman statue.

I began to look into the Mothman in earnest, reading about it in some UFO books by the late WV-based UFO researcher Gray Barker, and finally reading the Mothman Prophecies by the then not-so-late John Keel.  I even interlibrary loaning some documentaries that had been made about it.  What was already a strange story became stranger still.

During the course of his investigation, Keel became convinced that what had happened in Point Pleasant went beyond mere alien visitation or a lurking cryptid.  In addition to men in black, Keel reported about some encounters with a person called Indrid Cold that had reportedly spoken with a local man after having climbed out of a lantern-shaped UFO.  Keel himself claimed to have encountered Cold as well as having spoken to him on the phone on a number of occasions, and claimed that Cold proved to be quite prophetic himself.

The Mothman is a rabbit hole with lots of twists and turns and side tunnels.  I won’t go into it further here, but if you have any interest in the topic I woul

ighly recommend you first read The Mothman Prophecies and follow that up with a viewing of the documentary on Gray Barker called Shades of Gray.  (If the movie you watch turns out to have lots of bondage sex in it, you’ve probably got the wrong one…  or, come to think of it, maybe not.)

Between these two works, you can probably get an explanation for some of what went on in 1967, not all of which was otherworldly.

The ambiguity of the case, though, made for a good story.  It has the same sort of feel as shows like Twin Peaks and Lost.  Those shows were popular partly because they were like a big jigsaw puzzle, with pieces that seemed to fit together, but with other pieces left out of the box, and when you assembled the pieces you did have they didn’t quite form a satisfying cohesive picture.  Still, it was a fun story to research.

By the time I was on my way home from writing class, potential dead body discoveries nibbling at my mind, I realized I had my story when I imagined the dead body found to be that of a Mothman.  While that scenario does not appear in the story in that precise form, the idea behind it does.

Artist’s depiction of the Flatwoods Monster

Within short days I had a draft of “…to a Flame.”  I think the title came first, which I thought was clever and layered.  The characters of Jeff, Virgil Hawks, and the inclusion of UFO All Night radio host Rik Winston followed closely thereafter.  What I was trying to do was drop these characters into a heightened version of West Virginia, in which Mothmen aren’t so uncommon a sight that one might not be too surprised to find one crapping behind the tool shed.  (The Flatwoods Monster–or, probably more accurately–the Braxton County Monster also mentioned in the story falls into that category, too.  “Flatwoods Monsters always were the damndest looking things.”)

While I didn’t design him to be, Virgil is quite a lot like me, though I imagine him to look kind of like Dale from King of the Hill.  He’s a guy who is fascinated by tales of the strange and Fortean, who probably grew up reading about monsters, like I did, and listening to Art Bell late at night.  Rik Winston was, of course, inspired by Art Bell.  And the story Virgil tells about the “doctor guy” who calls in to Rik’s show was inspired by a real series of calls to Art Bell’s Coast to Coast AM from the 1990s. The real story turned out to be a complete hoax, of course, which the “doctor” guy eventually admitted on Art’s show.  However, this hasn’t stopped him from trying to make money off of it to this day.  (UFOWatchdog has more about the real story and the “doctor’s” actual identity HERE.)

After workshoppiHng the story with my class, and penning a few more drafts, I submitted “…to a Flame” to the 2005 West Virginia Writers Annual Writing Contest.  It took third place in the Appalachian Writing category, which was the first time I’d ever won anything in that contest.  I’ve won a handful since then, often in the Appalachian Writing category, which, being a boy from Mississippi, I find a little amusing.

The story was ultimately published in the anthology Mountain Voices: Illuminating the Character of West Virginia, a publication for which I’m indebted to its editor Chris Kuell.  However, this was not to be the only form the story would take.  It would be a few years off, but my Mothman saga would eventually find another life on the stage.