TARDIS Collector’s Corner: The 11th Doctors’ Spin & Fly TARDIS (with a bit of the 10th too) (Burning Through The TARDi, Part 2)

CONTINUING THE TALE FROM PART 1…

Around the time of the introduction of Clara Oswald as the Doctor’s companion in 2012, Underground Toys, in my humble opinion, lost their way a bit.  They made the bold move to switch their main line of Doctor Who figures and toys from the former 5.5″ scale used since 2006 to a 3.75″ scale.

One might speculate that this move was decided in an effort to continue to keep manufacturing costs low, and one would be correct in this, which Underground themselves said as much at the time.  And so their figure line for 2013 was at the smaller, less-detailed, 3.75 inch scale.  This, naturally, annoyed me greatly, but only to a point.  While I was irritated at the scale shift (as a fellow who’d invested a good bit of cash on an 11 Doctor figure set and a number of TARDi might be) I also knew that the new scale would mean a new TARDIS in that scale and I was pretty interested in owning one of those.

Soon enough, Underground produced a scaled down TARDIS to accompany their new Doctor and Clara figures.  Instead of calling it an Electronic Flight Control TARDIS, they switch the title to Spin & Fly TARDIS. This is because this TARDIS wasn’t simply a miniaturized version of the Flight Control model, but they’d changed up (i.e. further reduced) its features a bit.  Instead of a concave spinning spindle on

the bottom, allowing the TARDIS to rotate when spun via the roof lamp, they included a clear plastic base that fit into the bottom of the TARDIS itself, which allowed the whole thing to be spun when set upon a table, or even in the hand.  (Alternately, you don’t need the base bit at all, so I don’t choose to use it and am uncertain what I’ve even done with it at this point.)

The Spin & Fly TARDIS still has the opening doors, the dematerialization sounds, and the lighted roof lamp.  It also has the interior background card of the redesigned TARDIS from the Clara era of Doctor Who.  But gone bye byes are all the other features of its larger predecessors.  Now, granted, the reduced size of the toy also reduces the space for all the electronics necessary to make all the previous functions work.  (Also, the doors of my particular TARDIS refuse to both stay open, which is one of the only remaining non-electronic functions left.)

Ultimately I felt the reduction in size of the line of figures, as well as the TARDIS, was a cheapening of the toy line as a whole.  And, apparently, I wasn’t the only one who felt this way, for Underground Toys soon issued statements about the matter saying that it was necessary in order to be able to continue making toys at all.  Still didn’t mean I had to like it.

Now, all that said, I still really dig the 3.75″ scale TARDIS.  There’s just something about the sturdiness of the basic four posted design that I find satisfying, reduced sounds and lights be damned.  Even in the smaller scale, it loses very little of that satisfying feeling for me.  I’m going to give it a 3 TARDI rating and will even admit to wanting to give it four.  But the cheapening of the line, to me, is not something I support so I’m sticking with 3.  I even wound up buying a 3.75″ scale Peter Capaldi to go with it, but only cause Gamestop was having a nice sale. 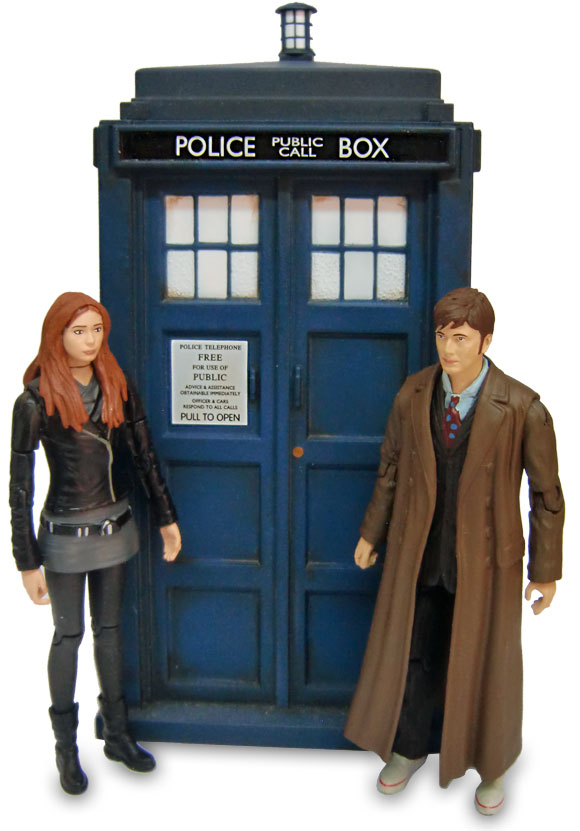 It seems that the 3.75″ line has kind of petered (no pun intended) out.  Underground did some play sets for Matt Smith and then a cursory few things for the first season of Capaldi, but not so much in terms of the most recent season.  They did release a third wave of figs, including a David Tennant figure, whose appearance is reflective of the flatter-haired version of his Doctor from Day of the Doctor.  And, for a hot hour or so, I became wildly excited because I found the image at right which appears to depict not only a 3.75″ scale Tennant figure, but an Amy Pond in that scale (not his companion, but what evs), and, most amazing of all, a Tennant era TARDIS done in the 3.75″ scale.  I was very excited indeed, because this would definitely be something I’d want for the collection.  However, upon further research, this appears to actually be a die-cast TARDIS toy from 2006 that so happens to almost match the scale for Tennant’s newer 3.75″ figure (though not perfectly, to my eye).  See the image below for the products that were apparently combined to make this “set.”

Now I have to start scouring ebay for the die-cast TARDIS.  It’s nice to have a quest. 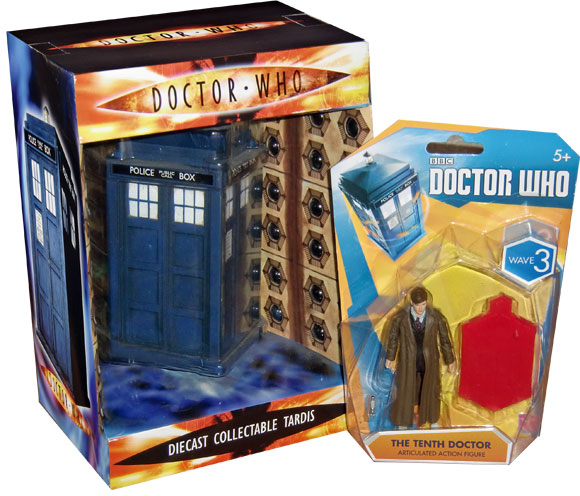