We were recently covered up in snow and arctic winds.  Seemed like a good time to get out and take some lovely snow shots with a couple different versions of the electronic toy TARDISES that I own in honor of the very snowy ending to Peter Capaldi’s run in the 2017 Christmas Special.  I intended to pick one of them to write about but discovered that it was difficult to tell either of their stories without telling not only the story of the other as well, but also a completely different previous electronic TARDIS toy that I’d not intended to write about yet.  I had really hoped to space out the electronic TARDISES a bit more, as they tend to be among the jewels in the crown of my collection, but it looks like I’m just going to have to recklessly burn through all three in a multi-part saga just to get it all right.

I’ve gushed rhapsodic here about my love of the original Underground Toys Flight Control TARDIS from the David Tennant era.  It’s maybe my favorite mass-market TARDIS (i.e. one not uniquely and painstakingly crafted using a combo of skill and love by my mother-in-law).  When Matt Smith took over the role, a Smith era TARDIS toy soon followed.  It looked fantastic, with the darker shade of blue and the St. John’s ambulance badge restored to the door.  It had the interior backdrop of Smith’s first, brighter, earlier sheet-metal TARDIS control room, and an updated roof lamp.  Plus the windows of this were completely blacked out, which looked really cool–except there was kind of a reason to black them out.  It seems that this version of the TARDIS lost some of the previous TARDIS toy’s functionality in terms of having no interior lighting and non-illuminating Police Public Call Box signs.  (No need for transparent windows if you’re not going to light up the interior, eh?)  It retained the dematerialization sound effects, the control room sounds when the doors were opened, the roof light, the whooshing sounds when spun via the spindle on the bottom and the spacey sounds when shaken.  Pretty great and still quite playable, despite the lack of all the lights, but it kind of just screamed “CHEAPER-TO-MANUFACTURE” in big bold type.  But, man, does it look cool, so I’m going to give the 11th Doctor Flight Control TARDIS a solid four TARDI.

(Side note: Underground Toys also produced an even cheaper version of the 11th’s TARDIS which didn’t have lights or sounds of any kind, but did come as a “Christmas Adventure” set with 11th Doctor and Amy Pond figures.  On the surface, the set is a misnomer because the figures it includes have nothing 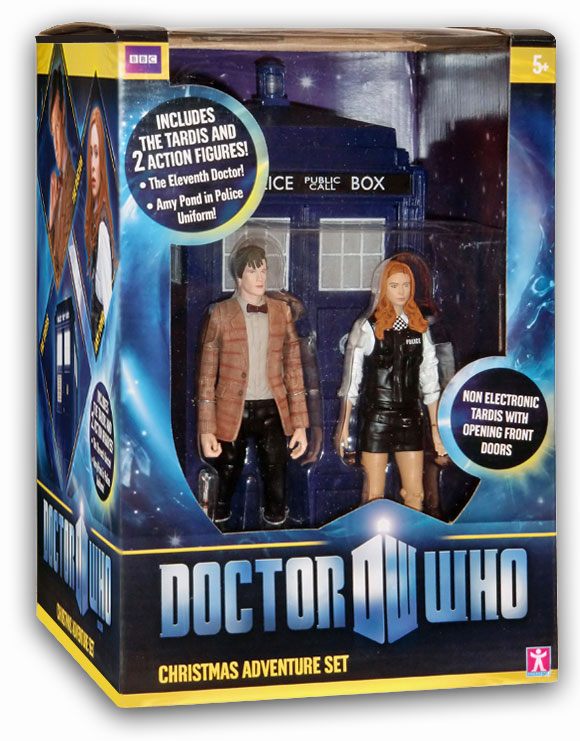 Christmasy about them, as Amy is wearing her police officer outfit.  However, if you stop to think about it, Amy Pond had returned to her police outfit for some honeymoon bedroom role-playing with her new husband Rory for the first Smith Christmas special.  They just fail to specify what kind of… um, “Christmas adventures” Amy happened to be having on the trip, nor do they include Rory in his Roman Soldier attire to seal the notion.  The packaging, as you can see in the accompanying image, boasts that it is non electronic and has opening doors.   Those doors even have transparent windows, which I guess means Underground Toys just said “Hey, if we tell them it’s not electronic, we don’t have to hide it by darkening the windows.  EFF it!”   I declined to purchase this model.  And I have half a mind to give it a two TARDI rating to spite Underground Toys for being cheap bastards on a Christmas cash-grab.  However, Amy’s Role-Playing Honeymoon Bedroom garb alone may technically qualify this set as the most “adult” toys in the whole Doctor Who line–at least until they come out with Madame Vastra and Jenny figures–which is worth at least and extra few points.  So I guess I’ll give this unpurchased-by-me set three.)