“Anninversaries” the 20th and the search for presents 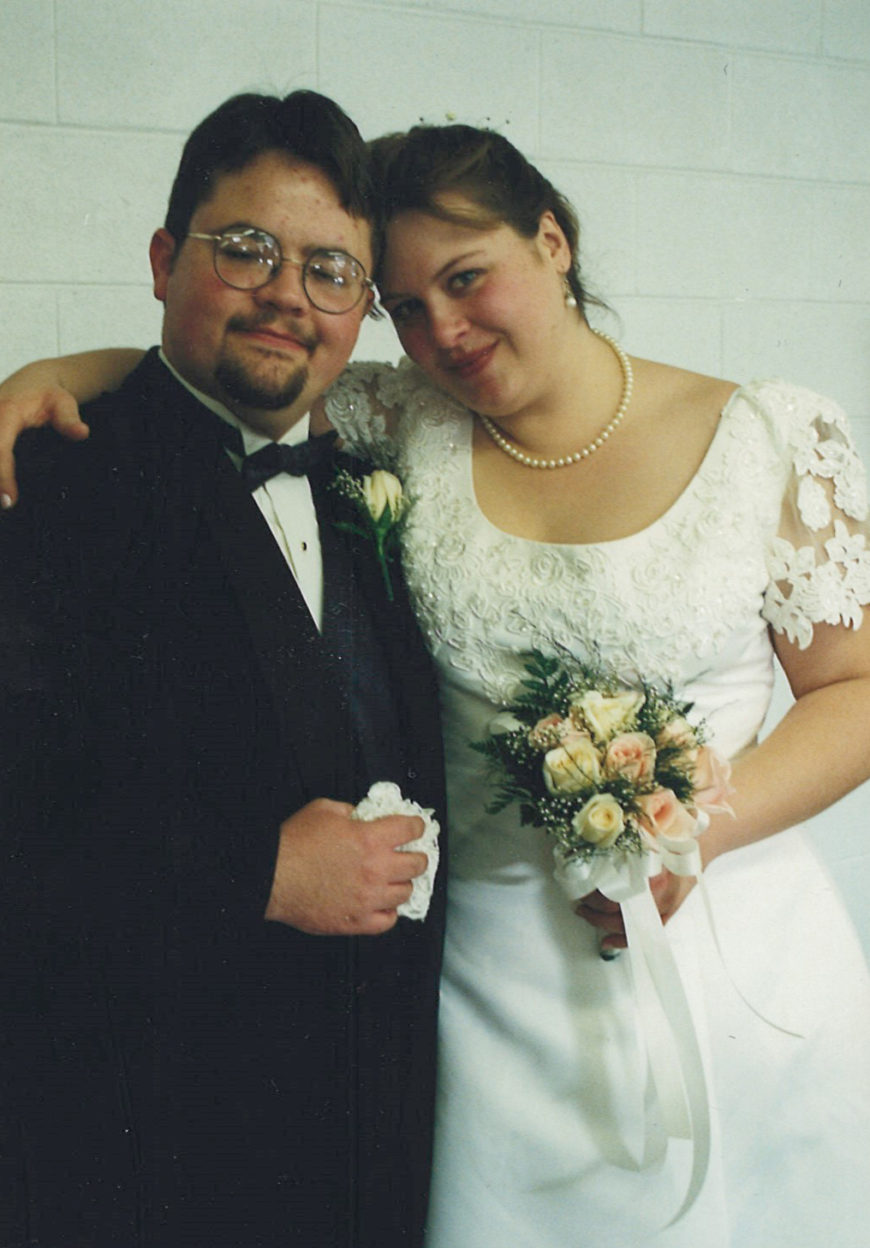 Twenty years ago today, some kids got hitched.

(There’s some controversy there, though, cause my bride was actually wearing the preacher’s wedding ring when she said her vows, as hers fell out of his bible and onto the floor, seconds into the ceremony, and he just switched out his own for it to save a big awkward mid-wedding ring search. In a groom-daze, I failed to notice any of it, though, until he handed me his yellow gold ring in place of her white gold band, and all I could think was “That damn jewler! He sold me a painted ring!” It took some complex facial expressions on Ashley’s part to communicate what had happened and I finally realized it was the preacher’s ring. However, technically, I think this also might mean I’m married to him.)

Those kids then said their vows in what felt like a blur, smooched, and walked the aisle. They took their pictures, went to the reception where they hoped to party down on some fantastic wedding grub. Except every time they tried to get even one bite of their very own wedding food, plates were snatched out of their hands and they were shuffled away for cake-cutting and gift-opening and champagne-toasting and garter-tossing and bouquet-chucking. And with each plate-snatching, they were promised that copious amounts of wedding food had been packed for them to take on the honeymoon, so don’t sweat not getting to eat any of it now.

And they stepped out of the reception hall and into the February sun as man and wife. And their friends and family pelted them with bird seed, which ran down in their underwear and made the wedding night a little complicated.

And they piled into an automobile that any right-thinking mechanic would have warned them against traveling to Walmart in, let alone Gatlinburg, but they got there all the same and with most of the trailing cans intact.

And only there, in their cozy honeymoon cabin, the Smoky Mountains smoking outside and their bellies rumbling inside, did they discover that the copious amounts of wedding food that had been promised had been packed into the wrong vehicle.

At least they had the birdseed.

We don’t normally buy each other anniversary presents, but 20 years is 20 years. A few weeks before our anniversary date, however, I began thinking what would make a good present for my bride. On major anniversaries in the past, we’ve taken return trips to Gatlinburg. For our 10th anniversary, we returned to our original honeymoon cabin. However, in the intervening decade, what had once been a quaint and remote little a-frame cabin waaaay up in the hills had now become just a house in a fairly crowded neighborhood of dozens of such houses. Walking naked to the back deck hottub during daylight hours was no longer an option. So on our 15th anniversary, we stayed in an entirely different mountain cabin in Pigeon Forge–which was also basically in a neighborhood, but had a better view. This year, though, we don’t have a lot of spare time for even a weekend trip, so I opted for something more material as a present.

In thinking about successful presents I’ve given in the past, the one that came to mind was a graduation present I gave the wife of a painting by local water colorist Jeanne Brenneman. I’d snuck the painting in and hung it on the wall in place of another one, waiting for Ashley to notice it. On the off chance I could create magic a second time, I went to Jeanne Brenneman’s website to peruse what she had for sale. And there I found the perfect painting, a watercolor of northern lights called Cosmic Chaos. Being from Alaska, the northern lights hold a very special place in my wife’s heart. She’s seen them with her own eyes and it’s one of the things she misses dearly about Alaska–one of the things only true Alaskans, who stay the winter-long, get to see on a regular basis. Seemed a good fit.

I wrote Jeanne Brenneman, explained that I was interested in her painting, and asked if it was still available and, if so, nearby–some of her work is on display in galleries far and wide, so it would be my bad luck if it was out-of-town on an extended tour. As it happened, the painting in question was hanging on her studio wall because it was one of her all time favorites too. We set up a time for me to come pick it up, on a day during which the wife was still out-of-town herself seeing her newly born grand niece in Kentucky.

Instead of waiting til our actual anniversary date to give it to her, I decided to do it on the day she returned–since our actual anniversary was packed with other obligations. I decided to hang it in a conspicuous place and wait for her to see it. And I picked the most conspicuous bit of real-estate our walls had to offer–directly beside the front door. It’s a spot we’ve never hung anything in the past, but was a nice chunk of space to accommodate a none-too-small painting.

The wife came home, opening the front door to enter the house, the door itself blocking her view of the painting. Once closed, though, the painting was very obvious–it’s purples and reds standing out against our tan wall. She didn’t see it.

I kept my phone ready to take video, but all I got were four shots of her walking directly past the painting on her way out the door to bring stuff in from her car. After nearly an hour, I finally decided to take the painting down for a bit. Partly this was because she asked me to go to Walmart to get macaroni for dinner, and I didn’t want her seeing it while I was gone, and partly because my in-laws were out for the afternoon and I knew they would want to see her reaction, too.

Later, once everyone was home, I put it back up when she was in the shower and we all began to wait.

Nope. She walked by it several more times, oblivious.

After an hour, my mother-in-law decided to try and speed things up by standing in proximity to the painting hoping Ashley would notice. She noticed Ma acting squirrely, and commented on that, but didn’t see the painting. I began to wonder if she’d already seen it and was just toying with all of us.

About the time I’d set my phone down and given up on capturing the moment, she finally noticed it. Only I didn’t get to see her see it. I only looked up when Ma was smacking the back of the sofa near my head to get me to pay attention. I turned to see Ashley standing directly in front of the picture staring into it with a look of awe on her face. She stood there in silence for over a minute, beaming.

“How does she do it?” she finally asked.

“I know,” I said. “I thought it looked great online, but it’s so much more impressive in person.”

Thanks again, Jeanne. It was just what I’d hoped it would be.

A couple days later was our actual anniversary date. I had a card for the wife and she had a card for me. They both had the exact same envelope and a near identical lump where a ribbon was incorporated into the exterior of the card therein. We burst out laughing, thinking we had–as we have in the past–purchased the exact same card for each other. But, no, just cards by the same company. She had also brought me an anniversary bouquet of Reese’s peanut butter heart flowers (Reese hearts taped to straws) which were poking out of holes punched into the top of a box of Lucky Charms. I was overjoyed. I would show you a picture, but I was forbidden to take one since the bouquet’s appearance didn’t quite match her mental image of what she’d been aiming for. (I took one anyway, but it somehow disappeared from my camera by morning. You might think Ashley deleted it, but it’s gone from Google Photos automatic upload backup, which she wouldn’t know how to access, so I think it genuinely disappeared on its own.)