As one of the final entries in this TARDIS Collector’s Corner series (prior to my multi-year sabbatical from writing them), I wrote about one of my shotglass TARDISes, the Funko POP! Vinyl Keychain TARDIS. I mentioned in the entry that this particular tiny TARDIS was based on a much larger Funko POP! TARDIS toy, about which I would one day write in the future.

This is that day.

Just as I did back in March of 2018, I shall again in March of 2022 declare that Funko’s POP! Vinyl figures are a plague upon this earth, as chronicled in the book of Revelation itself. (I was almost going to do a bit here where I added a 14th verse to Revelation 8, covering the unsealing and distribution of beady-eyed plastic demon idols, then I remembered that there’s another verse in Revelations (Rev 22:18), where the author explains the fate which will befall anyone who adds to or takes away from the prophecy. So, thanks, but I’m gonna pass on my dumb joke.) Four years on, Funko POP!s are even more ubiquitous and underfoot than they were in 2018. They’re found not only glutting the shelves of nerd stores, but are now spreading to retail outlets far and wide, whether it makes any damn sense for them to be sold there or not. I continue to weep for our landfills. (*COUGH*COUGH* saysthemanwhoowns16ofthem *COUGH*!) 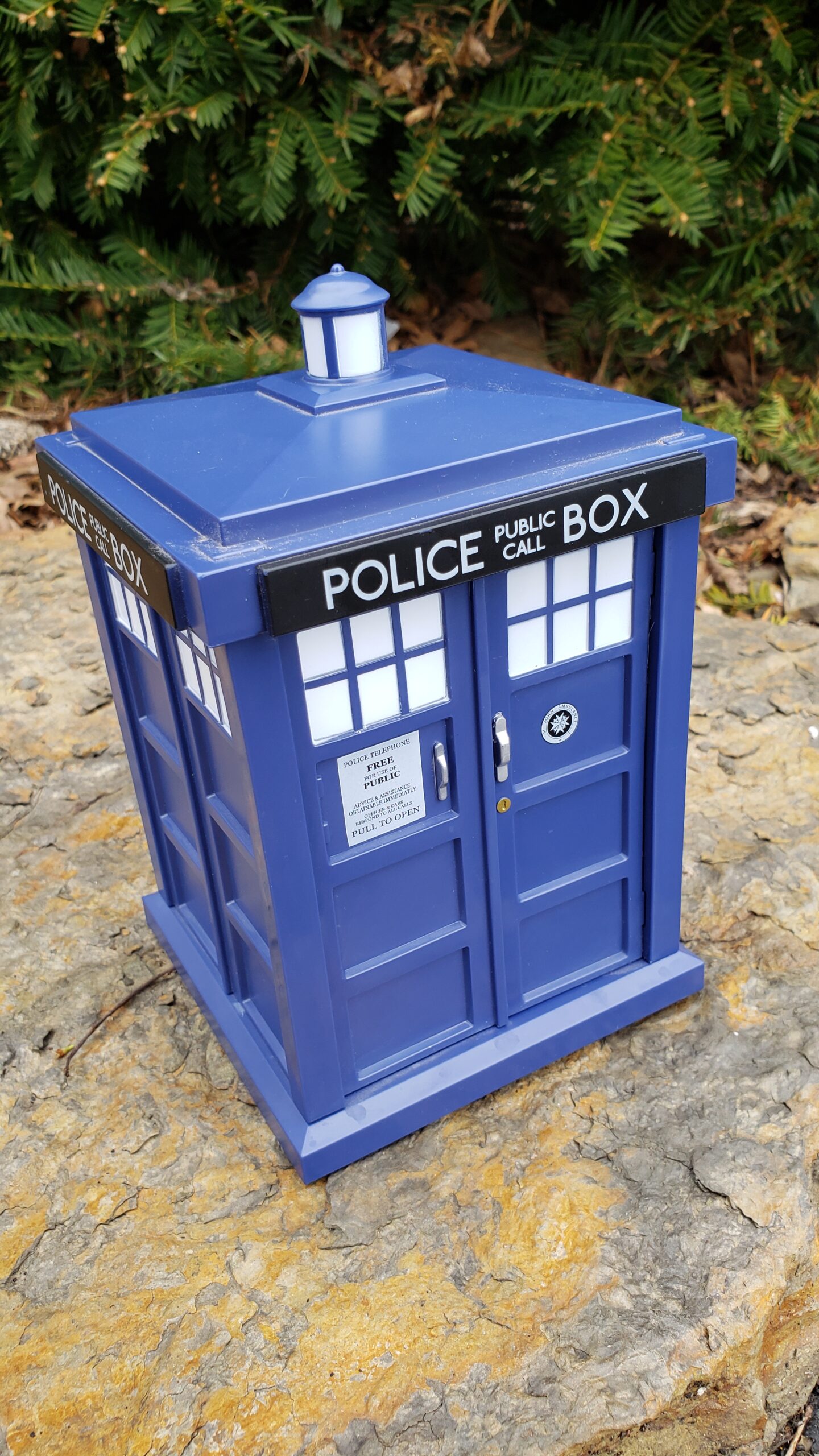 Regardless of my feelings about Funko POP!s themselves, I absolutely had to own the Funko POP! TARDIS in all its boxy glory. The Funko’s POP! TARDIS is squatter and wider than the real thing, as in keeping with the stumpier dimensions of the figurines, but without the creepy black eyes. While this is supposedly based on the Smith/Capaldi era TARDIS, oddly, the supports between the panes of the windows are not white as theirs were, but blue–more in line with a Eccleston/Tennant box, or just about any of those from classic Doctor Who. Funko otherwise did a good job on the details, such as the hardware on the phone cabinet door and the hardware of the TARDIS door handle itself. They didn’t go for a wood grain detailing on the surface, but they captured the beveled edges of the base and nicely detailed roof cornices. A lot of skimping could have been done, but was not.

Did I mention it has a door? Oh, it’s got a door all right. A door. A single opening door, that is. Yep. Funko only included one working door on a two-door TARDIS. (Well, I say “working.” It does open, but requires a bit of effort to do so, and is somewhat difficult to close again afterward.) Of course, if you’re only going to have one working door, the right hand door is the one to choose, as it’s the only one that tends to be seen open on the show. However, when you take a look at the 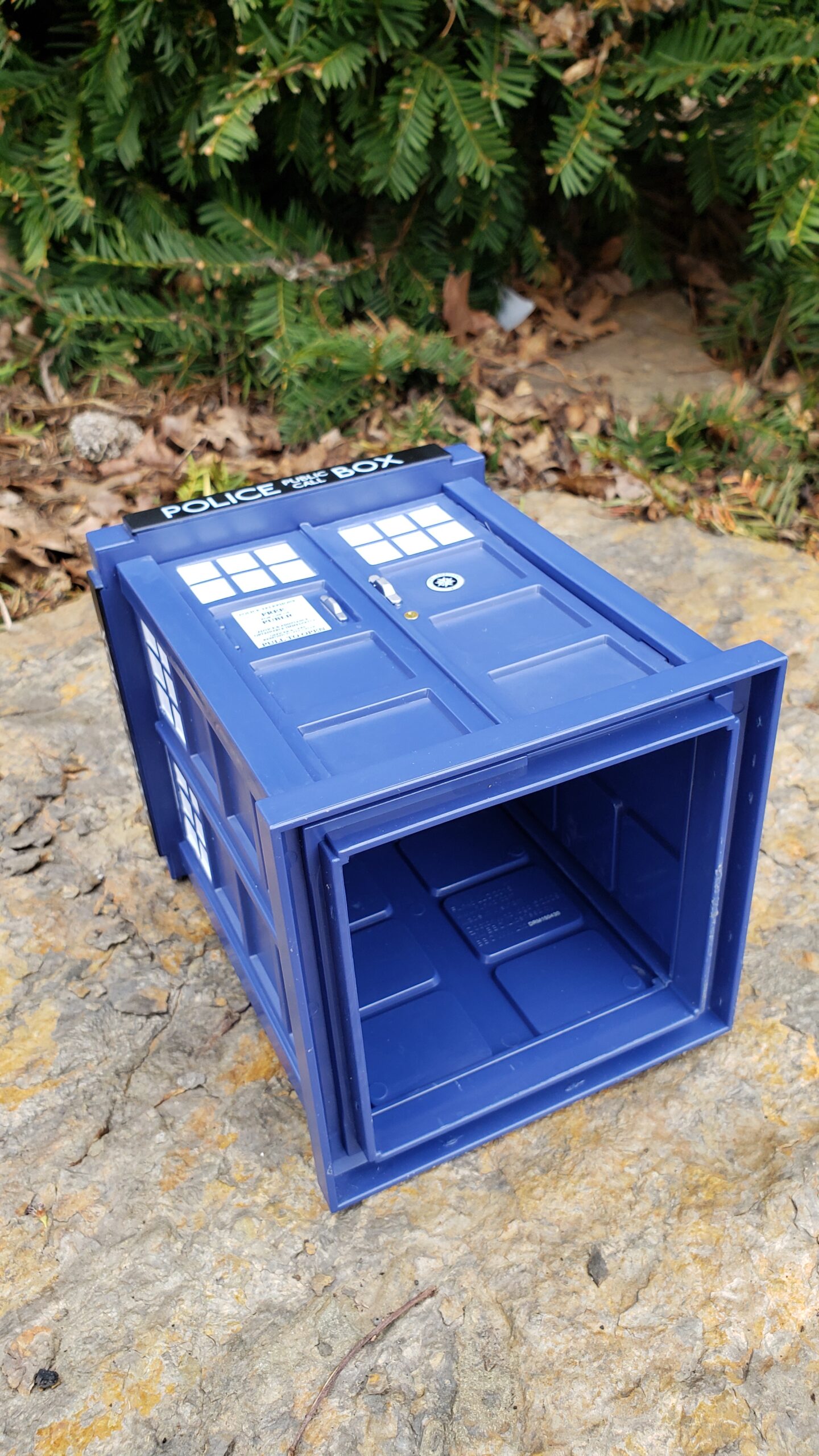 noggins on the Funko POP! figurines, one starts to do a bit of mental measurement estimation and one then immediately comes to the conclusion that the only Funko POP! that’s gonna fit through the doorway is one of the keychain sized figures. That’s when Funko reveals the twist in their story.

Funko knew none of their encephalitic figures would fit through that one door passage. However, they also realized that even if both doors were allowed to be open and a figure inserted within, a collector would then be hard-pressed to close either of the doors with such a gargantu-craniumed figure inside, or for that collector to ever have a chance at closing both doors again–figure or no. What good would that do? At the same time, a collector would clearly want to be able to show one of their Doctor figures peeking around the interior edge of the left door from within. What to do?

Funko’s elegant solution was to include a feature unlike any other TARDIS release I’ve encountered: this TARDIS features not only a false bottom, but an entirely missing bottom to boot. That way, you just stand your Funko Doctor wherever you want him (and/or her) and lower the TARDIS over them, door already in the open position.

As far as TARDISes go, it’s not a bad one. It may be in an exaggerated cartoonish geometrical configuration compared with your standard TARDIS shape, but it retains a good amount of detail. While very light in feel, it is also surprisingly solid in construction and not at all cheaply made. Do I wish both doors opened? Yes. But I’m totally cool with only the one as well. I mean, really, what kid would want to play with Funko POP!s anyway? They’re among the least functional toys ever made, clearly meant for adult man-children to set on a shelf and allow to collect dust. Accessory toys don’t really require much more functionality than that. All in all, I give this a solid 3.5 TARDi.