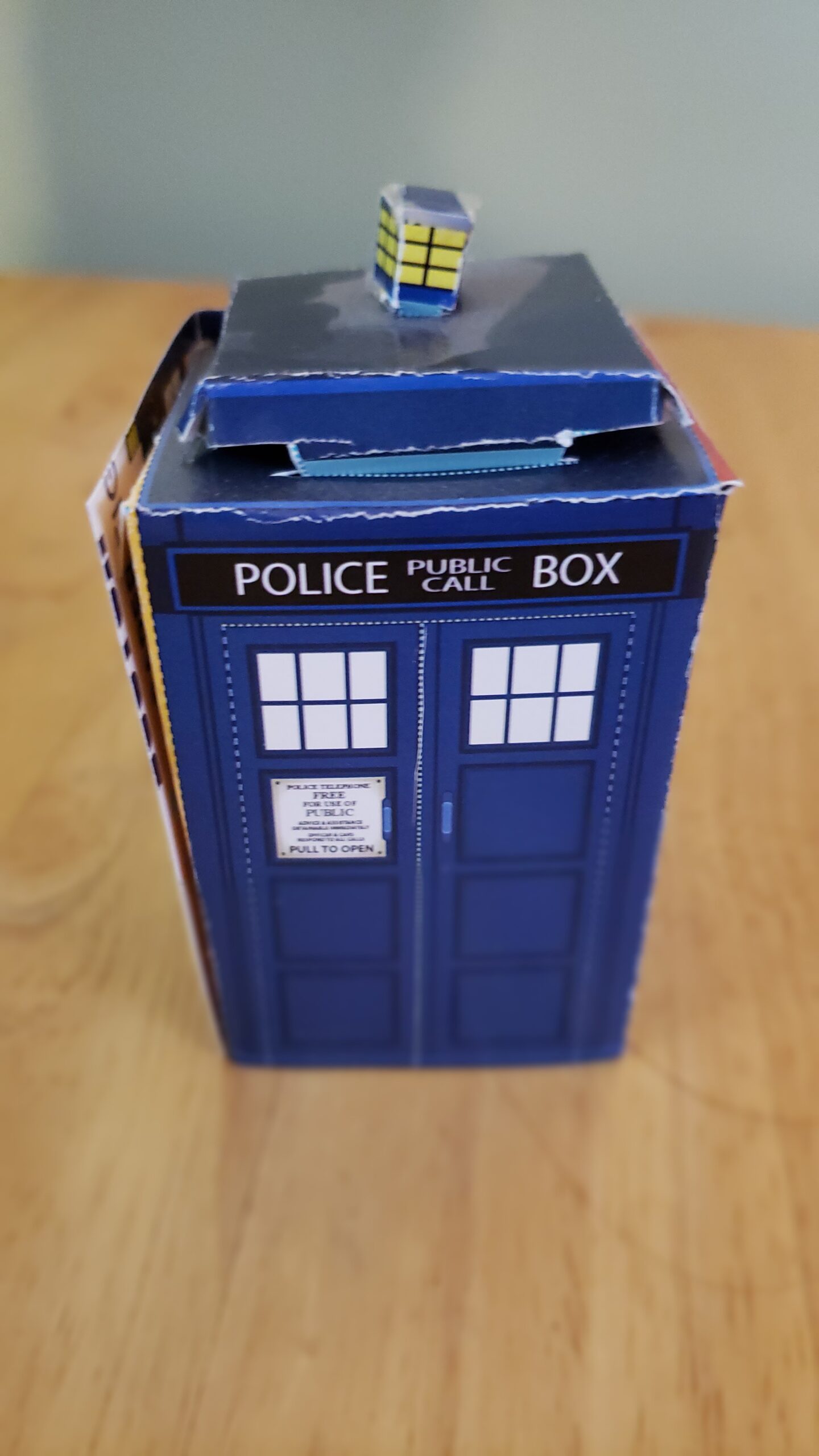 I like the idea of paper TARDISes–printed paper kits that can be cut out and assembled into a model of the TARDIS. In my time collecting TARDISes, I have purchased four such TARDIS model kits. I have, however, only attempted to assemble one of them thus far and it was such a disappointment that I have avoided the other three (two of which, truth be told, are really the exact same paper model that I accidentally purchased twice).

The half-assed disappointment Lootcrate model is kind of what it sounds like. It was a paper TARDIS included in a Lootcrate shipment which I purchased second hand off of eBay. It arrived as a single sheet with perforations allowing you to easily cut out the sections of the TARDIS model itself. The half-assed part is doubly so (which I think technically should make it full-assed, but I only used half my ass in constructing it and the Lootcrate folks only used half of theirs designing it, so, really, the separate half-assed applications can’t equal a whole). 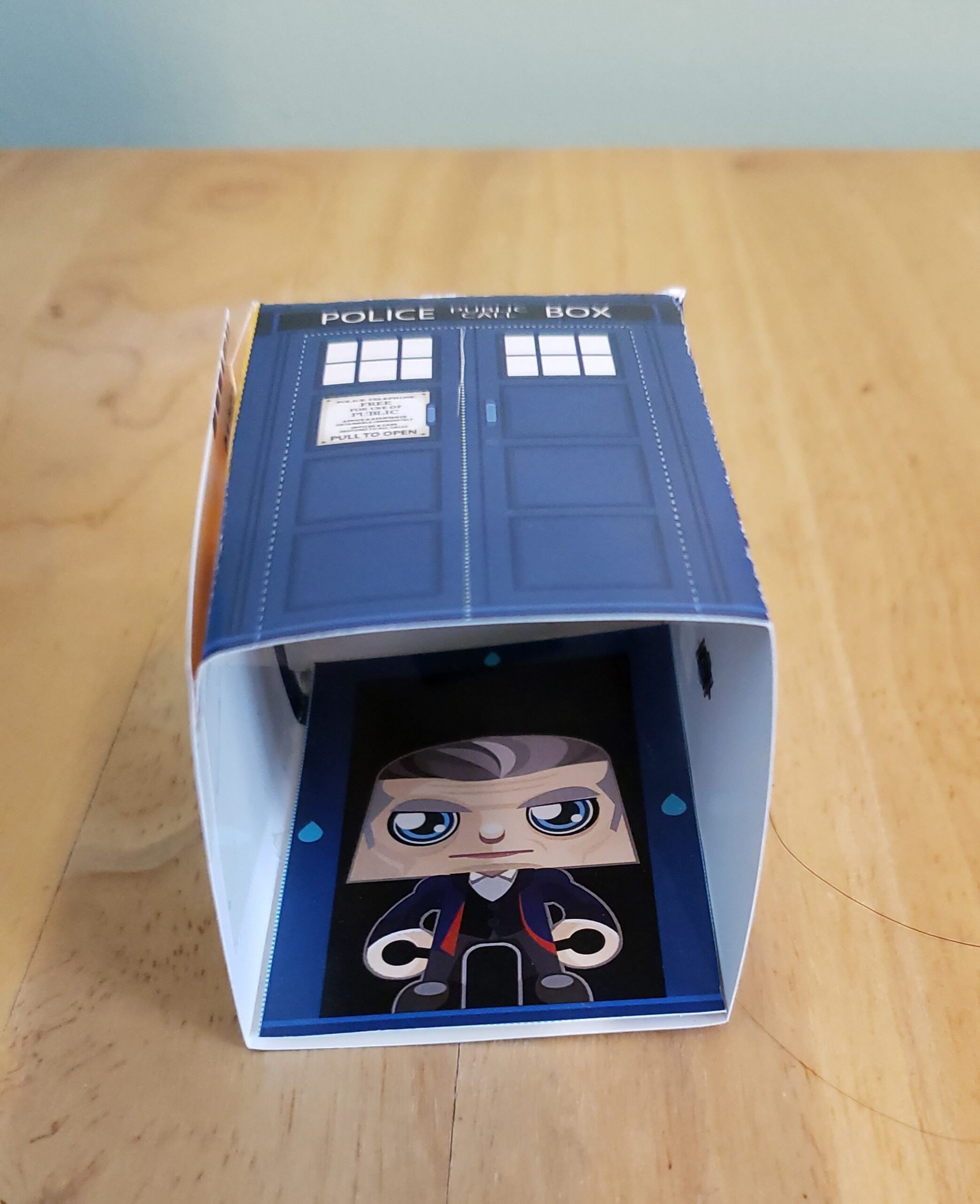 Let me start with the good. It’s a simple enough TARDIS design, consisting of an elongated rectangular square for the body, a roof housing that tab/slot inserts, and a square tab/slot lamp. Shouldn’t be hard to put together, really. It is also designed to have doors that can be opened in the front, to reveal a cartoony Peter Capaldi scowling out from within. I thought that was pretty cool. However, I have kept my doors uncut simply because I’m not sure the structural integrity will hold if they were ever cut open.

The bad. While the simple print of the TARDIS has most of the standard TARDIS elements, including Police Public Call Box signage above each side, and the TARDIS door sign, there is some inattention to detail that can be found, leading me to suspect someone other than an actual fan of the show 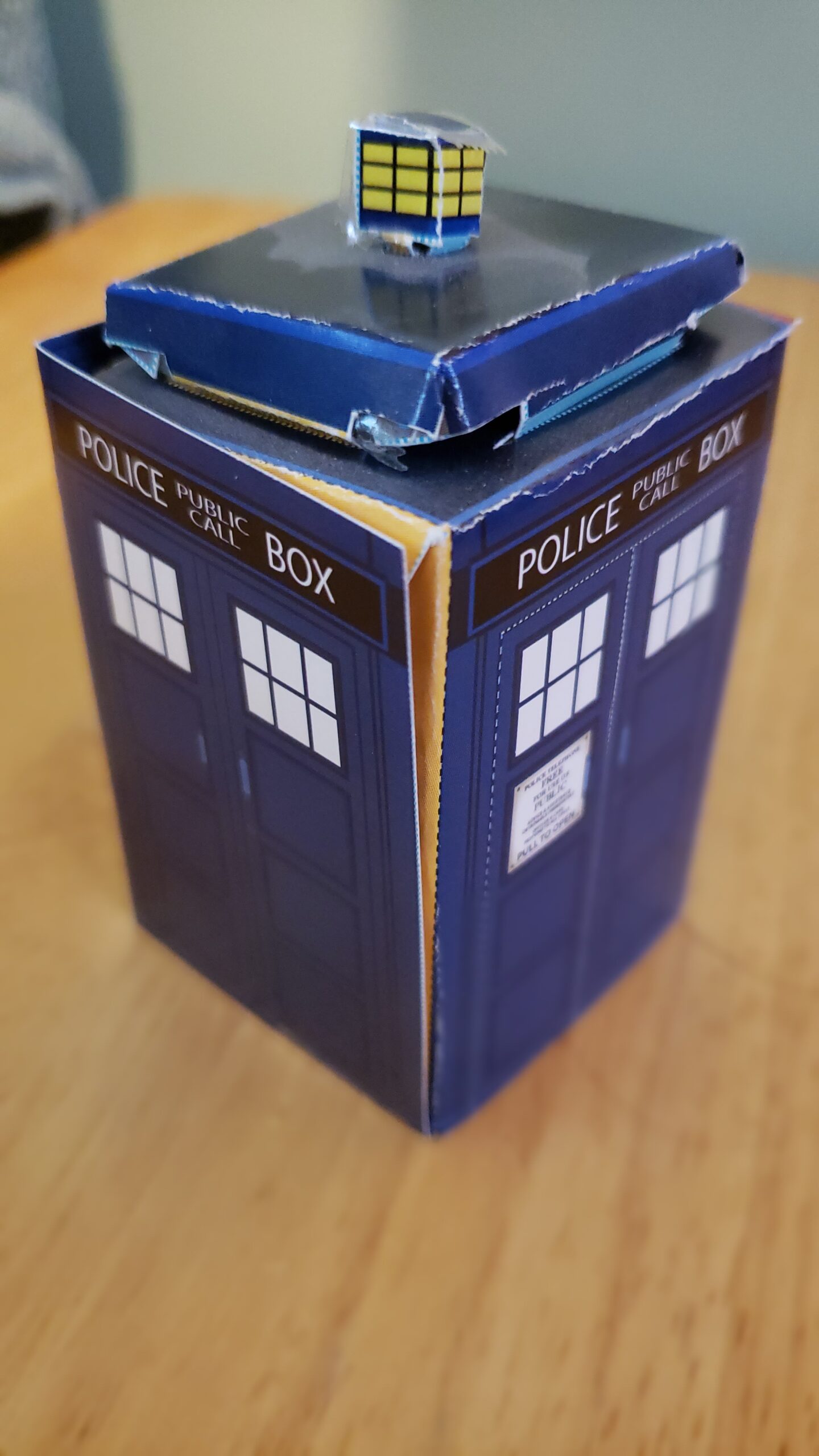 did the graphic design. For instance, if this is truly a Capaldi TARDIS, as the Capaldi inside would suggest, where is the St. John’s Ambulance badge on the right front door? Also, why are there door handles and door sign phone cabinet handles included on each and every side? It’s almost as if whoever did the graphic design only drew the one door, copied it three more times and slapped a door sign on one of them to establish which side is the front. And while we’re talking about which side is the front, why on earth would they have designed this so that the cut seam falls right beside the left of the front of the TARDIS rather than in the back corner where it wouldn’t be so apparent?

As to my own half-assedness, I admit that my assembly leaves something to be desired. I’m sure someone else could have put this thing together in a way that didn’t look quite so jankey. I mean, I could have taped down that front left cut seam and made that look at least a little better, if I’d wanted to. What I found, though, was that this was an assembly project that took a good bit longer to accomplish and with a greater level of difficulty than I had assumed it would, but I was only willing to put in the minimum amount to get it together, but not the amount it would take to make it look its best. That said, Lootcrate didn’t do anyone any favors in the design department, so I’m giving them the majority of the blame. If I hadn’t paid $10 for it, I would probably wad it up and pitch it at the recyle bin.

I give it a rare two TARDi rating. (Would have given it a one had I not thought the Capaldi behind the doors thing was kind of clever.)