I wrote a few weeks back about the Bird Feeder Model TARDIS, one of the many TARDISes my mother-in-law has given me over the years. It’s largely not even a display item anymore, unless by “display” you mean “sitting way up on a shelf in the garage,” due to the weather damage it received when I used it for its intended purpose as a bird feeder out in one of our flowerbeds.

I think Ma wasn’t happy that this wooden TARDIS she’d constructed hadn’t held up. She repeatedly gave me permission to throw it out, but I wouldn’t hear of it. However, she was none too keen on how the thing was put together in the first place, knowing there were ways she could have done it that didn’t involve the danger of having a hand impaled on one of the screw tips that stick out of the bottom.

Two weeks ago a package arrived in the mail. From the box it arrived in, it seemed to be a shipment from Chewy. And when the mail lady drove it up to us, staying well within the confines of her truck so as not to risk a nip from one of our dogs, and I came out to take it from her, I saw it was from Chewy and said about the dogs, “Ironically, it’s for them.”

Turned out, it wasn’t. I should have known as much when Ma said, “What have I ordered now?” Only when she opened it, she saw it was not something for the dogs but, instead, for the birds. And for me. Ma brought the box over to me and said, “This is actually for you.” 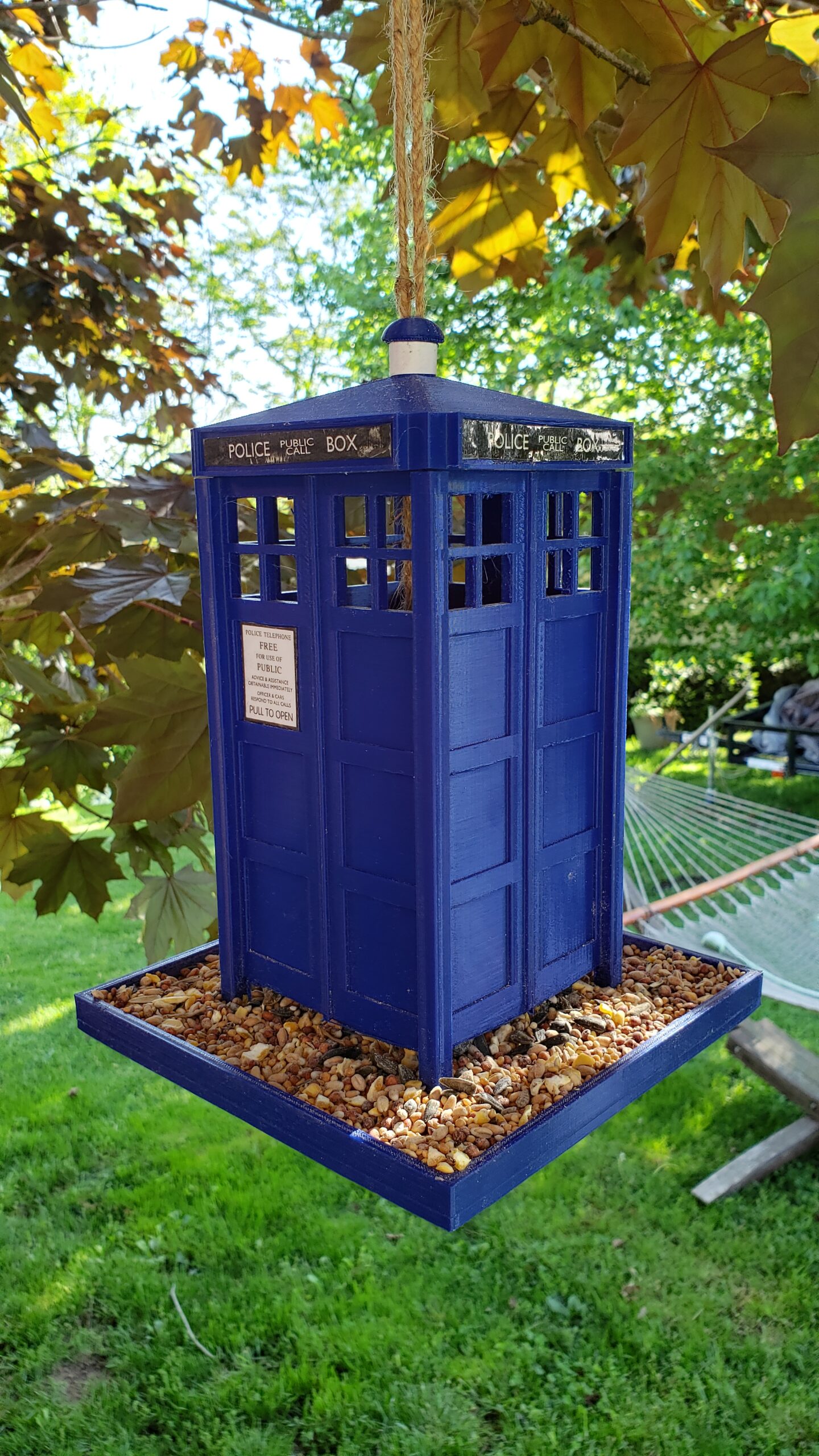 I peered inside, expecting some kind of insane dog toy. Wrapped up in bubble wrap and padding was a 3D printed TARDIS bird feeder. I was astounded. It was printed in TARDIS blue, was uniform on all sides, and had no decals or door sign, but I knew that would be easily remedied. In design, it was very similar to the TARDIS bird feeder she had made for me, with a removable roof into which bird seed could be poured, and slots at the bottom of each door for it to spill out from into a wider tray beneath. Instead of being dangerously screwed into that tray, though, the whole thing was 3D printed on top of the tray, as part of it. The major difference, beyond general shape, was that this bird feeder had a hanger threaded through a hold in the roof lamp which fed down through the housing itself to a ring in the base, allowing it to be hung.

The TARDIS design is a little off in some of the detailing, such as the corner columns being too thin and the windows being quartered instead of cut into two rows of six, but the door paneling is quite respectable. There’s no denying what it is on sight.

After doing some measuring, I printed up a customized door sign as well as some Police Public Call Box signage to go on each side of the roof. These I sealed between layers of packing tape then cut out and rubber cemented in place, figuring this would be a fairly easy way to keep them weather-proofed. For the roof lamp, I just rubber cemented both sides of a strip of paper and wound it around. I totally dig it. We filled it with seed and hung it in a tree by our patio.

Today, while eating breakfast on the patio, some larger birds came and began eating out of the TARDIS feeder. Whenever one of them would get full and fly away, the force of their departure would spin the TARDIS around on its string in a very satisfyingly TARDISy way.

If you would like one of your own, Ma found this one on Etsy.