(An ongoing writing project in which I catalog and quantify my excessi– uh, extensive TARDIS collection. Find previous entries HERE.)

As I recently mentioned in the previous paper TARDIS entry, the Nick Bell Model), one of my formative experiences as a youth was to attend the Summer Scholars Onstage Theatre Camp at Mississippi State. It’s a theatre camp for gifted junior high and high school kids, who gather together, usually 50-55 of them total, write a three-act musical comedy in a week, and then perform that show at the end of the third week, complete with dance numbers, acting, costumes, sets, the whole bit. I was only a camper for two years, then came back as writing staff for a handful of years, took ten years off, returned to the writing staff, and eventually became the script coordinator for the writers camp for several years.

One thing we’ve learned in the nigh on 40 years of the camp’s existence is that, when wrangling 55 kids, keeping to a schedule is an important thing to do. It’s therefore always important to write out the schedule on a big long piece of paper for everyone to see. We usually assign the task of writing out said sched to creative and artistic souls who will not only supply the schedule for the following day, but make it look good too. One such soul during one such year was George Bennett. George was a camper himself during the early years of my return and he returned as staff for a number of years following his high school graduation. Whenever George was around, there was no question who would be doing the schedules. 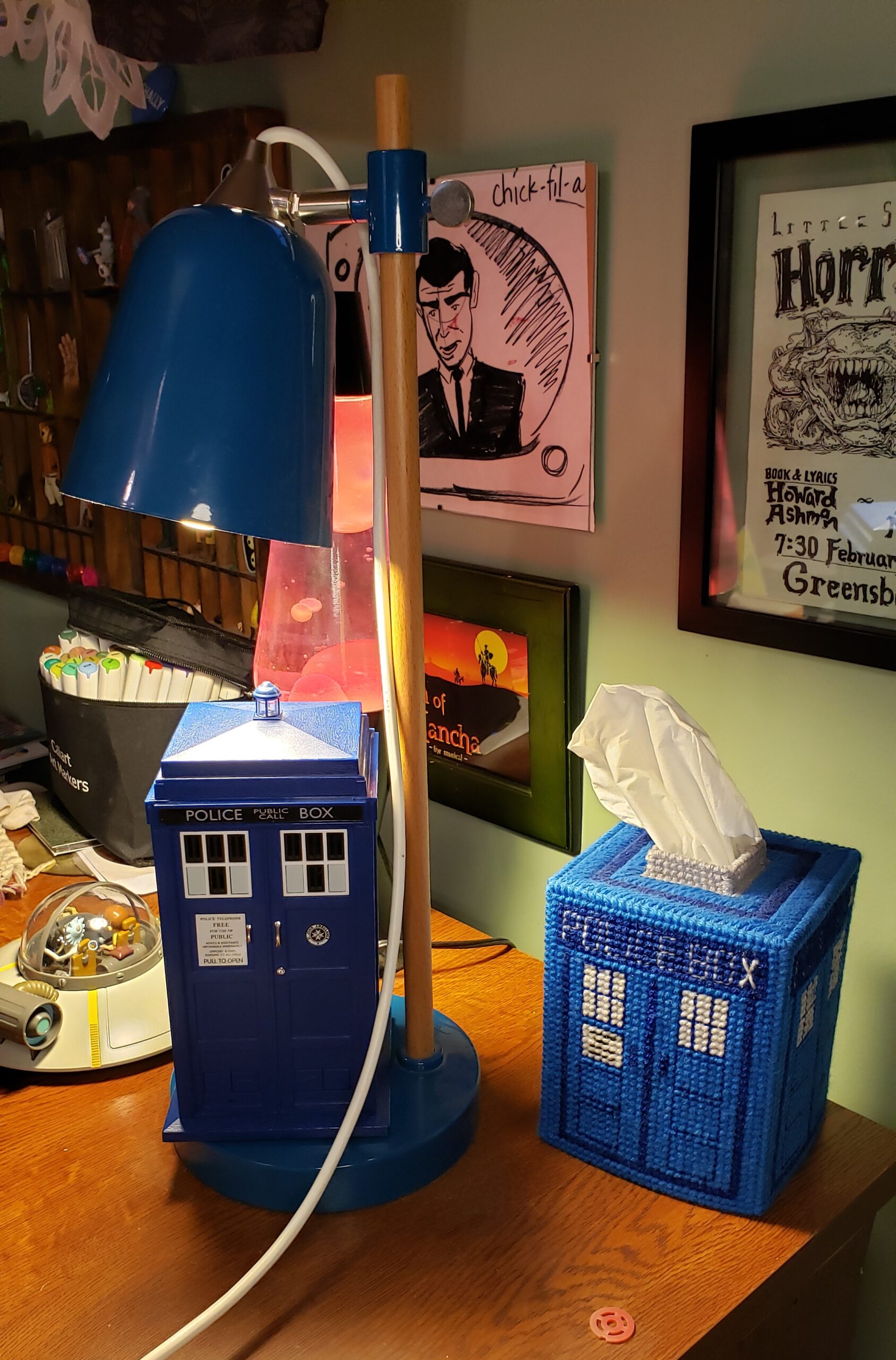 In addition to being a talented comedic actor, George was a gifted artist even in those early years. He was able to dash off magic marker sketches that were annoyingly good for those of us who only wish we had his kind of talent and have to work so very hard to achieve anything presentable ourselves. George made it look effortless. He’d been doing the schedules since a junior counselor camper, but once he’d enrolled at the Savannah College of Art and Design, his schedules improved beyond the impressive level they’d already set.

The image at right, which I featured a couple of weeks ago in the TARDIS Cozy entry, contains one of George’s sketches–a quick doodle of Rod Serling in a TV set that I found charming and which I purloined at the end of camp. 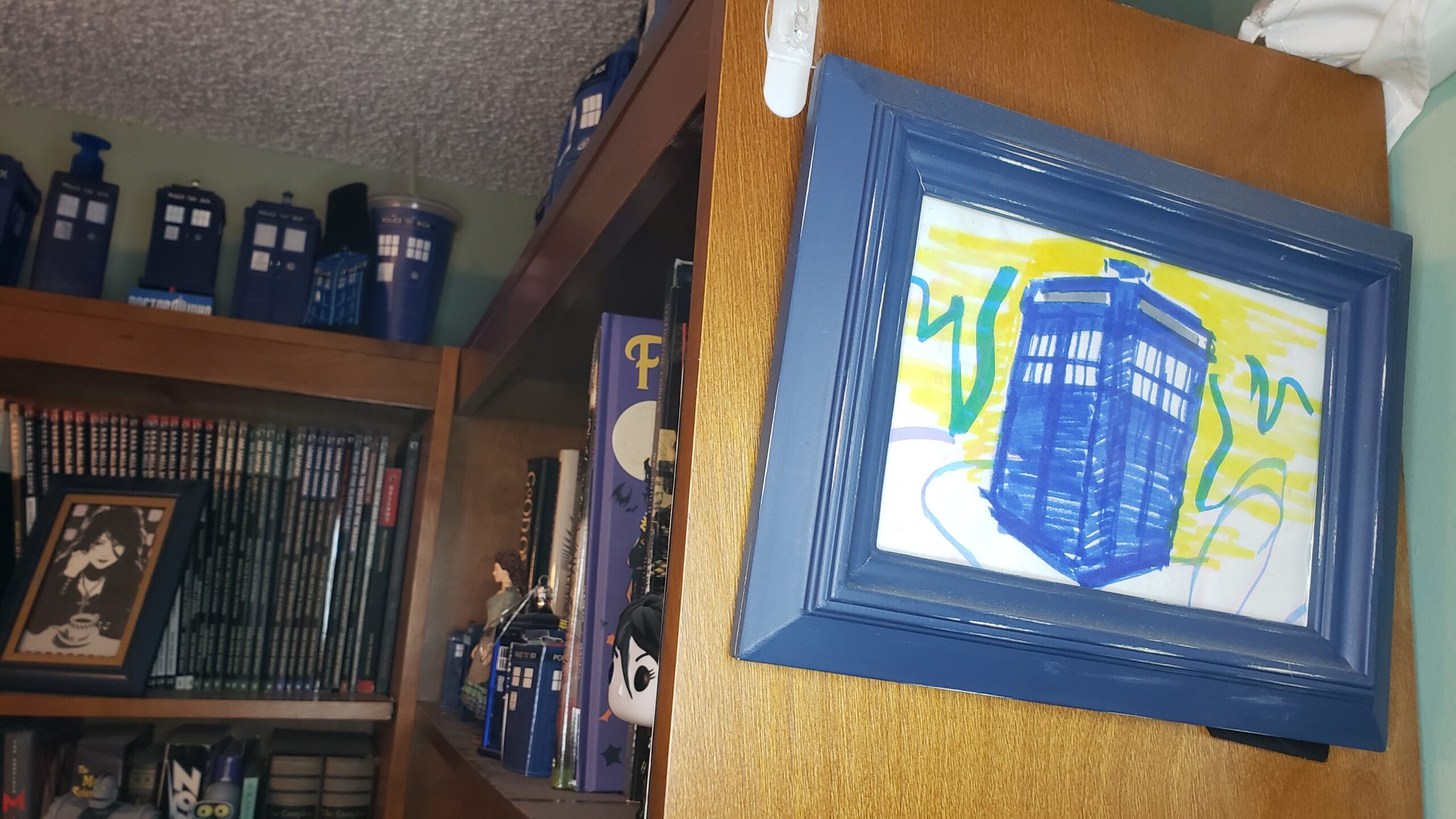 Our play’s theme that year was a pastiche of Twilight Zone style stories–hence the Serling appearance. However, time travel was also a factor in the plays, with it ultimately being revealed that Rod Serling himself was from the future and, due to some alterations to the timeline, Tales from Dimension 13 (the title of our play and the TV series within the play) transformed into The Twilight Zone. With time travel as a factor, though, it only made sense for George to sketch a random TARDIS in the corner of another day’s schedule in scented blue magic marker. As a lover of TARDISes, I couldn’t resist saving this one too, and it now resides among my TARDIS collection, as you can see in the photo. And one day, when George is famous, I shall sell it for a mint (though I might have to get him to sign it first).

Lest you think that George’s talent was limited to schedule pages alone, perish the thought. In the intervening years, he has gone on to become a professional illustrator and storyboard artist. These days, you can find him and his work at GeorgeBennettStoryArtist.com.